Varied with some hilly sections among the flat regions.

In 1792 a grist mill was erected by William Davis in the new Barton Township near Albion Falls and used to grind the grains that the local farmers would harvest. Not far from the grist mill, a saw mill was also built to serve a small but growing community. This community hosted three hotels, a general store and a blacksmith shop. The grist mill changed hands a half dozen times over the years, but by the early 1900s the small vibrant village called Albion Mills was all but forgotten. Albion was a poetic version of the name Britain, and Mills referred to the saw mill and grist mill which once had their home here. Not far from the original location of the mill, one of the mill stones has had a plaque anchored into it, and it rests in the King's Forest Park.

Albion Falls was once seriously considered as a possible source of water to supply the city of Hamilton. Rocks from the Albion Falls area were used in the construction of the Royal Botanical Gardens' Rock Garden.

The ravine at the Albion Falls has a legend of the Lover's Leap. The story is this: Early in the nineteenth century young Jane Riley, disappointed in love with Joseph Rousseau, stood at the top of a steep cliff not far from thundering Albion Falls and flung herself to the bottom 100 feet below. The steep drop has since been dubbed "Lovers' Leap" and many tales have grown up about the suicide. 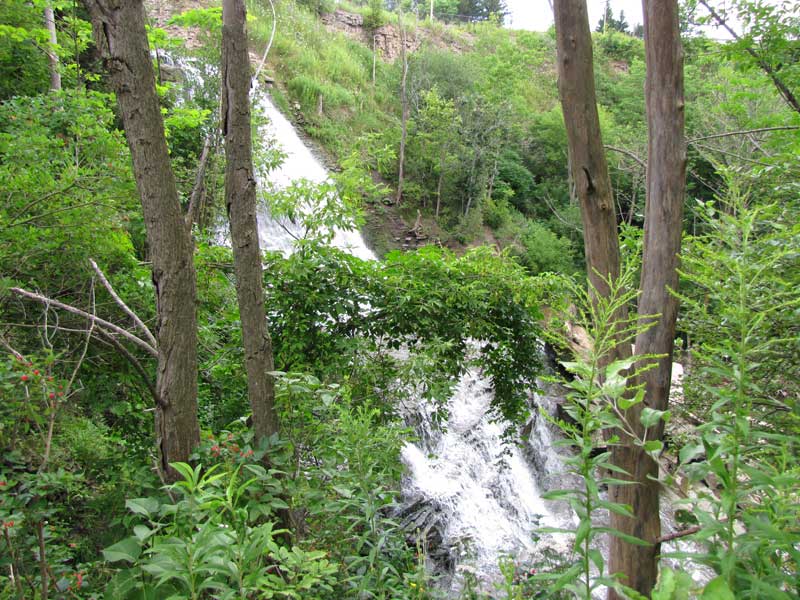 The history of the Devil's Punch Bowl dates back at least some 450 million years (the late Ordovician and early Silurian periods) when materials which form the Niagara escarpment were originally deposited in a large inland sea. At this point in history, corals and other organisms inhabited the area until, as the sea bottom deposits slowly changed to rock, these organisms became fossilized.
Approximately 1 million years ago, the area was subjected to four great ice ages. By this time, the inland sea had already retreated and great slabs of ice covered the land. Their effect on the landscape was to either sharpen or expose the escarpment rock face or to bury it with drift material.

Following the end of the last ice age there was a period of high water levels. This is what etched the final details into the landscape of the Punch Bowl. The water concentrated into huge streams which had a tremendous capacity to carve out the landscape. One of these powerful streams plunged right over the escarpment at Stoney Creek and carved out what would later become known as the Devil's Punch Bowl. Eventually, there was less water available in the area to continue the powerful stream, and its capacity has been greatly reduced. It has become a landmark that is famous with geologists worldwide for its exposed rock strata.

One dominant feature of Devil’s Punch Bowl is a large, 10 m high steel cross. This cross was erected on December 18, 1966 by a man named William Sinclair (1925 - 1994). He felt he could bring a little light to the world by building the huge steel monument which has 106 light bulbs along its edges and was originally planned to be lit up for six weeks of each year, during Christmas and Easter. However, since 1991, the cross has lit up every night of the year, being turned on automatically each night thanks to donations made by a Stoney Creek branch of the Knights of Columbus.

This is another great waterfalls hike that takes in six (or more) waterfalls along the way. I prefer to begin the hike from the Mud St parking lot because as you walk the short distance towards Albion Falls there is a great lookout spot (Lover's Leap) along the way. I also recommend descending to the base of Albion Falls for a closeup view. The descent can be a bit tricky but not too difficult. From there, you pass Buttermilk Falls which seldom has much water and continue until you descend to meet the Bruce Trail and cross the bridge over Red Hill Creek. Arriving at Felker's Falls, the best viewpoint is around to the far side of the falls (just follow the Bruce Trail). This is a nice charming waterfalls in a beautiful setting. Leaving Felker's, you will pass a few smaller falls on the trail to Devil's Punch Bowl. Here you can pass the lower falls and walk up stream on the righthand side of the creek for a magnificent view looking up at Devil's Punch Bowl. This trail has eroded significantly and it's now more difficult to get past the lower falls.