About 13 km (including the 3.5 km Great Esker Side Trail loop)

Intermediate (based on length of hike)

No steep climbs but quite a bit of walking up and down hills with over a half dozen stiles (fence ladders) to climb over. There is some rough footing in areas of numerous limestone rocks. Lots of interesting locations along the route so this is a walk to take your time on and enjoy the sights.

Free parking in lot at end of entrance roadway; open daily nine am to five pm

At wooden bridge over Snows Creek; at Hickory tree -waypoint 011

The Bennett Heritage Trail officially opened on Canada Day in 1992. The trail explores the Scotsdale farm that was donated to the Ontario Heritage Foundation in 1982 by Stewart and Violet Bennett. They named Scotsdale Farm in 1938 when they bought a 200-acre farm. Gradually they purchased neighbouring properties to form this 1300-hectare property that borders the Niagara Escarpment and shares with it the special ecological qualities of the Escarpment. The farm itself has actually been worked for two centuries, having been tilled by native people long before the arrival of the Europeans. Bennett had developed Scotsdale into an internationally renowned breeding farm for his Arabian horses and shorthorn beef cattle. 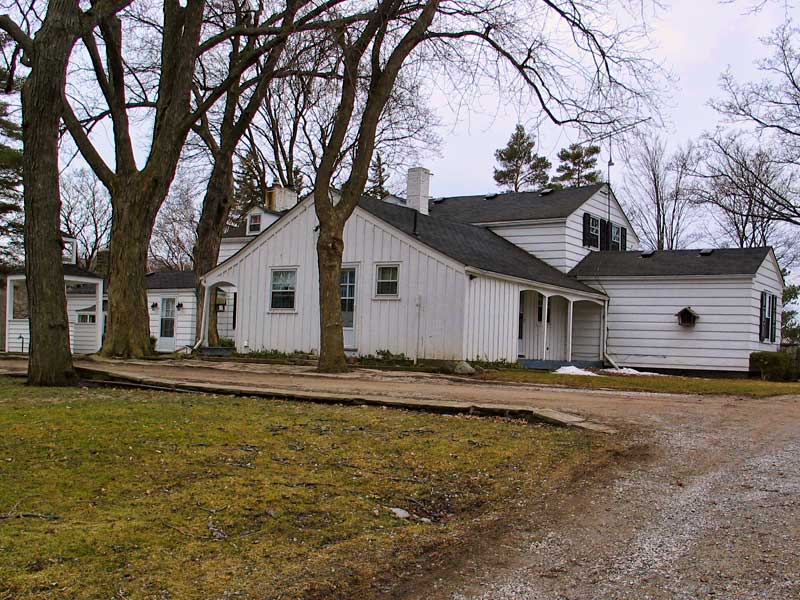 Today the farm is still a working farm and is managed by the Credit Valley Conservation Authority. The Bruce Trail reveals some incredible scenery as it passes through the area. Two big gable-roofed barns built in the style called early Central Ontario, are situated just east of the main house. The large front porch was added for a film shoot by taking over the space used by the farm's machinery shed. Among other films, the farm was used as a set in the filming of The Recruit starring Al Pacino & Colin Farrell in 2003. (This film also includes scenes shot in Niagara Falls, Niagara-on-the-Lake, Toronto and the Lower Bay Subway Station platform.) More on the Scotsdale farm can be found in this pdf document.

On July 13, 2010, I received a note from the Bruce Trail Club pointing out a mistake on TorontoHiking.com, " Re: Loop hike L01 - I received a request to correct the spelling of Scotsdale Farm (in three places where it is spelled with two t's instead of one.) from someone who grew up on the farm and thought this was our page. Thanks." I appreciated this note and quickly made the embarrassing corrections and it was nice to know that someone who grew up on this great farm cares very much about it.

The Great Esker Side Trail is an interesting trail to explore. An esker is a long winding ridge of generally parallel layers of sand and gravel, examples of which occur in glaciated and formerly glaciated regions of North America. Eskers are frequently several kilometres long and, because of their peculiar uniform shape, are somewhat like railroad embankments. In the Great Esker Side Trail, the trail heads though the woods and then descends before climbing up onto the esker to follow the edge of this ridge of land. At the bottom of the loop is an old majestic hickory tree standing alone. I've had lunch in the shade many times under the broad branches of this tree.

Recently some of the ladder-type stiles mentioned in this hike have been removed as they are no longer needed. I didn't mind the stiles but I also have to say I won't miss them.

The Bennett Heritage - Silver Creek hike is a great hike that always has much to offer in all seasons and is one of my favourites. From the Scotsdale farm to the hurried rush of spring water under the bridge at Snow's Creek there is so much that is memorable. It's no mistake that this hike is numbered L01 as it was the first hike I tracked and photographed for TorontoHiking.com. The hiking covers the lower half of the Silver Creek Conservation Area and then continues through the northern area in hike L02, The Silver Creek Triple Loop hike and then beyond that to The Terra Cotta Double Loop in hike L03.