How to Survive Meeting a Black Bear 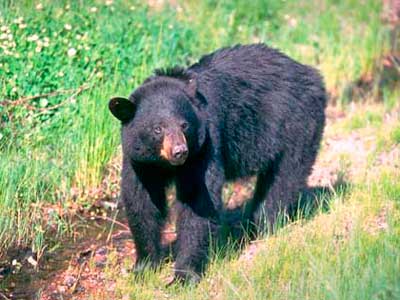 Try to avoid contact with bears. Many people don't realize just how big black bears are. A mature adult male can measure up to 190 cm (6 ft) in length, and weigh anywhere from 120 to 300 kg (250 to 650 lbs). Females can weigh up to 180 kg (400 lbs). Fortunately, bears are reclusive creatures, and they generally prefer to steer clear of humans. You can help them to do so by announcing your presence when you’re exploring their home environment: talk loudly, sing, or carry "bear bells" so bears have time to escape you.

If you see a bear from a long distance, leave the area. If you must continue forward, make a wide detour around the bear. If the bear has not seen you, do not disturb it but retreat calmly and quietly, and then make ample noise when you are well away to prevent any possible future encounters.

If the bear sees you, begin speaking in a low, calm voice and retreat slowly, keeping an eye on the bear but avoiding direct eye contact. Your goal is to communicate to the bear that you are human (i.e. that you can defend yourself and are not frightened) while also letting it know that you are non-threatening, and that you are leaving its territory.

Stand tall even if the bear charges you. If the bear sees you and is closer than 300 feet, or if the bear is approaching you, remain calm and try to look as large as possible. Try to back away slowly—do not run—and speak softly. If the bear continues to approach as you move back, stop and stand your ground. Speak more loudly in a deep, calm voice, and wave your arms to make yourself look bigger. Keep an eye on the bear, but avoid direct eye contact. Do not be aggressive, but do not crouch down, play dead or otherwise show fear or vulnerability. While you back away, drop, but don't throw, something on the ground to distract the bear while you make a slow but steady escape. If the bear charges you, muster all your courage and stay where you are: the charge is most likely a bluff, and if you stand your ground the bear will turn away.

If any bear makes a predatory attack or you receive any attack from a black bear: Fight back. Fight a black bear attack or any predatory attack. If the bear is a black bear, or if you have determined that the bear sees you as food (this is rare, but more common with black bears and, perhaps, polar bears than with grizzlies), your only chance of escape is to fight it or scare it away. Hit the bear with rocks, pots, pans, sticks or fists—anything handy, really. The odds may seem against you in a fight, but bears generally do not see humans as prey, and a bear that makes a predatory attack is usually immature, starving, or wounded, and may easily be scared away if you hit it.

Bear pepper spray is an important, last-resort defensive measure for anyone who spends time out of doors in Bear Country. However, there are a lot of misconceptions about this product and its proper use.

It's absolutely essential to avoid confusing "bear spray" or "bear pepper spray" with other pepper spray products. Many people mistakenly purchase and carry one of the numerous personal defense or law enforcement pepper sprays designed for use against other humans rather than bears. The products are definitely not the same!

DISCLAIMER: My attorney (if I had one) would certainly advise me in today's world to note that the content of this tutorial is provided for your information and convenience. I hope it will contribute to greater safety for people and better understanding of bears. However, when it comes to dealing with bears, there are no absolute guarantees, so I need to note that I can't be responsible for the accuracy of any of the information provided, or for the outcome of any situations in which you chose to use this information. So, continue hiking, have fun, be aware, and stay safe.