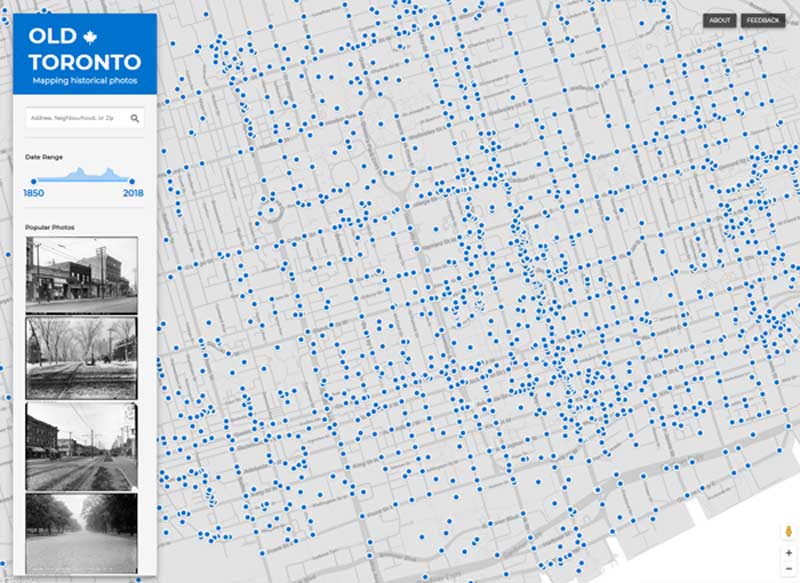 On Tuesday March 20, I attended a presentation by Sidewalk Toronto on the upcoming redevelopment of the Toronto eastern port lands. Sidewalk Toronto is a joint effort by Waterfront Toronto and Sidewalk Labs to create a new kind of mixed-use complete community on the Toronto waterfront. The hope is to combine forward thinking urban design with digital technology to create a people-centred neighbourhood.

Sidewalk Labs has just released a photo archive of Toronto in the form of a Google map with blue dots showing the location of photos ranging from the 1850s to the present time. By clicking on a dot you are presented with a series of photos of that particular location.

I found it fascinating to have access to these photos which are part of the Toronto Archive's collection of 1.7 million photos. At present about 100,000 of these photos have been digitized by the city and these are the photos available on the map. Sidewalk Labs intends to add more photos as they become available and the project is open-source which means it is available to anyone who wants to use it to create other applications or versions of the map.

Because this app is so new, I found a number of the photos to be misplaced on the map likely because an automated process was used to geo locate the photos based on photo descriptions. There is a Feedback button on the map asking people to report location errors, so hopefully the accuracy of the placement will improve with time.

This is obviously a side project for Sidewalk Labs but by releasing this app to the public, it looks like they are providing a small gift to the city as they move forward to redevelop some of the port lands.

Exploring the map can be a lot of fun especially looking at your own neighbourhood and seeing what it looked like many years ago. Looking at one of the busiest intersections in Toronto, Yonge and Dundas, shows 44 photographs. One of these shows the Brown Derby Tavern (remember that?) in June 1971. Also interesting is to see the way people dressed in those days and the photos of 70s automobiles on the streets. Another photo shows the Eaton's demolition on Dundas west of Yonge and the old Biltmore Theatre nearby.

Take a look for yourself and you'll find yourself spending more thime with the map than you anticipated. https://oldtoronto.sidewalklabs.com
Tweet
pinterest
How do you feel about this post?
Happy (0)
Love (0)
Surprised (0)
Sad (0)
Angry (0)
Sold out. Rockwood Hiking Day Trip (10 Km): Sat, J...
Eat Pray Explore ITALY :D (only 2 SPOTS left): Apr...