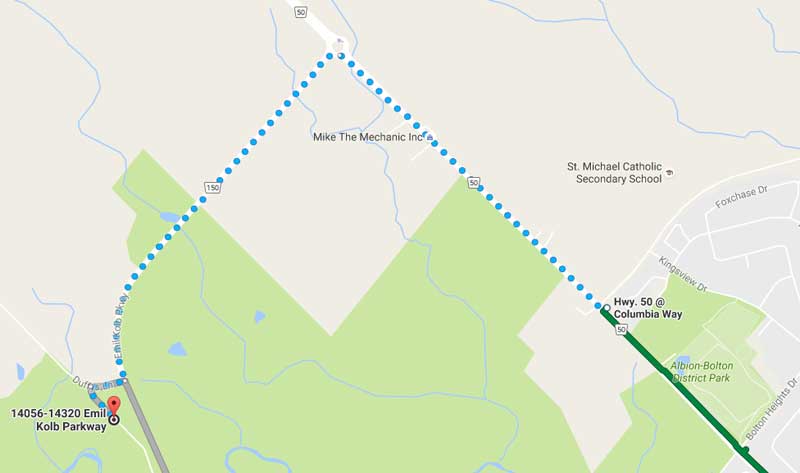 Hike L19 The Humber Valley Heritage Trail has always been one of my favourite hikes. But then about three years ago, it was decided that a new parkway was needed in the Bolton Area and the Emil Kolb Parkway was born. It sliced right across the HVHT just before waypoint (002) when starting out from the Caledon Centre. I first noticed this when doing a fall hike in 2013 with some friends when we noticed our path was cut off by this massive red clay swath cut out of the wilderness.

Fortunately it was a Saturday, so no construction personnel were around to chase us away and after a bit of a detour, we were able to find a safe place tp climb over the mud and then find the remains of the trail on the other side to continue the hike. The rest of the hike was straightforward except for a locked fence later on that we had to scale.

Around the same time, the beginning area of the hike where the descent into the valley begins, was under much needed trail repair with the replacement of the log berms to make a much safer descent.

I have avoided this hike for years now, until today. The first day of September was such a beautiful day free of the hot muggy weather of the past summer, so it was a perfect time to investigate the state of the hike L19. I began at the Caledon Centre (001) mostly just to see if there was a closure notice posted at the start across Hwy 50 at Columbia Way. There wasn't. But there was a notice saying the trail is unsupervised and you use it at your own risk. This was dated at the bottom with Nov 2016. Maybe this is anticipatory notice of when the trail should be open because it is not open today on 01 Sept 2016. I say this because it ties into two other bits of information.

One is that on the HVHVTA website, there is a map showing the rerouting southward to get under the parkway which I guess would add about a kilometre to the trail. This portion was shown in red but I had no idea if this was still in the construction stage or already completed. The map was dated 2016 so perhaps it would be done by Nov 2016. 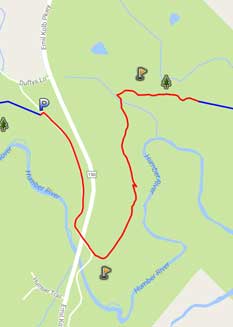 Time to get back to the car, enter the coordinates of waypoint (002) since the map showed a parking lot at (002) and drive there. It was a short drive further north on Hwy 50, to the traffic circle, second exit onto Emil Kolb Parkway. A quick exit at Duffy Lane and then a turn to the left took me to the new (002) parking lot. Mine was the only car in the nice lot. This lot is on what appears to be an extension of Duffy Ln but steel posts prevent you from going past the parking lot by vehicle.

It was easy to find the western part of the hike as it was marked by a sign with a huge HVHTA sign. But where was this big loop around the parkway. There had to be a way to get across the parkway and I guessed that it would be the continuation of the paved Duffy Lane beyond the steel posts. I followed that road downhill and could soon see that it went underneath the parkway, so I surmised that I had found the western side of the detour loop. But where was the trail on the eastern side. Exiting from the underpass, I saw some construction vehicles up ahead sitting by themselves seemingly abandoned. Beyond them was a grassy farm road leading north. Could this be the eastern part of the loop? I could see from my gps that I was heading toward where the old trail had been located.

In a while I came across another small construction vehicle and up ahead I heard voices and the sound of a chain saw. Soon I came upon two workmen who were cutting down some tree branches. They told me the trail was closed and that I could not proceed. I told them that I was looking for the continuation of the trail that would take me back to the Caldeon Centre. They let me know that they were working on the construction of that trail and confirmed that the paved Duffy Ln past the parking lot was part of the loop. The eastern part of the loop was now under construction. It would, they said, hook up with the old trail for part of the way. They hoped to have it completed late this fall. So this could be the second bit of information about the Nov 2016 date.

So that completed my investigation and it was time to hike all the way back to (002) and my car. Another car was now in the lot along with mine. The conclusion of the story is that for now, you need to begin this hike at waypoint (002) and park there to begin. See the map and diagram attached. Hopefully by next Spring one of my favourite hikes will be back. All in all a nice day.

Tweet
pinterest
How do you feel about this post?
Happy (0)
Love (0)
Surprised (0)
Sad (0)
Angry (0)
Why hiking makes you healthier and happier (Magazi...
Hike input from readers