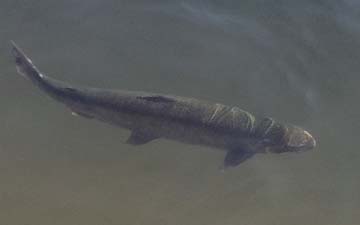 Monday Oct 30 was a somewhat windy and cool day but still a good day for myself and eight friends to do a walk along Highland Creek from Old Kingston Rd down to Lake Ontario. We didn't expect any surprises as we left the paved path for a more intimate walk throught the woods alongside Highland Creek. But we were surprised -a number of times.

Even though the annual Salmon Festival was held this year on Oct 1, as noted by Lorine, we still found many dozens of Chinook Salmon struggling to make it back up the creek from Lake Ontario to their spawning grounds. Here they lay eggs where they were originally hatched. Due to the low level of water this fall in the creek, it looks like a large number of salmon won't make it even though some are still struggling valiantly even at the end of October. 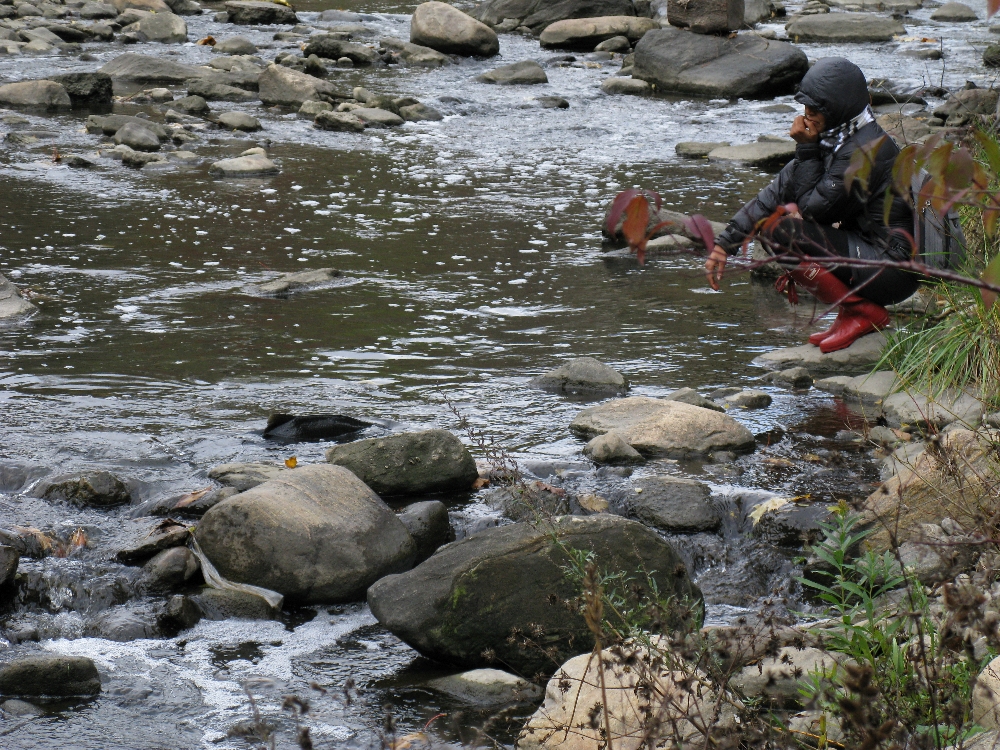 Mila looking at salmon -photo by Wendy LathamThe trek usually begins in early October when the water becomes a bit cooler due to cooler nights. The chinook salmon can grow to 60-90 cm in length and weigh up to 20 kg. Along with the Humber and Rouge Rivers, Highland Creek is a good place to catch the action.

Reaching Lake Ontario, another surprise lie ahead. We saw a Blue Heron gracefully swooping down over the creek inlet on the search for a meal of salmon. On the way back, I had to jump to avoid stepping on a small garter snake. It was very small for this time of the year so it's chances of survival were limited. Rick carefully moved it off the pavement for its own safety.

The final surprise was a call from Tita. She spotted a young deer across the creek just above the fence line. We walked along on our side watching it move in the same direction on the other side. We were able to keep track of it for five minutes or so.

On the way down we also investigated the fenced off areas where the orignal pathway fell into the creek due to a large storm a few years ago. A new wide gravel path replaces the devastated pathway.

By now it was close to 2 pm and with darkening skies, we felt a few drops of rain which hastened us on the way to an enjoyable lunch at nearby Amigos Restaurant. All in all, a good 3 hour walk.

Postscript: Before the hike we noticed a very unusual fruit on a tree across from the parking lot near the bridge where the guardrail begins. I commented

on this in a facebook post last year. Some thought it was Jackfruit or Breadfruit. But Wendy notes those are tropical trees, so it can't be that in Toronto. Wendy says, "Thanks to my mother, who told me they are Osage Orange (Maclura pomifera for those who care to know the latin!).  They are apparently edible, but are rather sour.  They are often used as decorations in a bowl or hanging.  I guess we missed the chance to gather some Christmas decorations!"

By accepting you will be accessing a service provided by a third-party external to https://www.torontohiking.com/