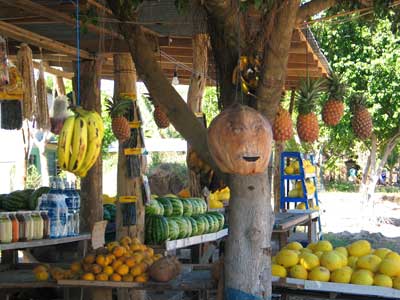 The incredible amount and diversity of the flora and fauna on display in this tiny nation combined with the wild variety of climates and landscapes can make your senses reel. This is a country of enchanting eco-zones, white sand beaches, and surfing sites that guarantee a fun and relaxing time. In the feisty capital of San Jose, dining and nightlife are everywhere to be found.

But only a day away are the active volcanoes, white-water rafting rivers, virgin rain forests and abundant wildlife. Don’t be surprised if you see a Canadian Warbler or a Baltimore Oriole as over 200 North American birds can be found here during the winter migration. Of course there are also tropical birds such as 6 kinds of toucans, 16 parrots and parakeets and more than 50 hummingbirds. The quetzal, one of the world’s most exquisite birds, with its’ glittering green plumage and the male’s long tail draws thousands of visitors to highland cloud forests from February to April. I was very fortunate on my visit to see three of these beautiful birds.

Hiking through volcano craters, cloud forests, beside active volcanoes and breathtaking waterfalls, and rain forests presents incredible vistas and diversity. Along the trail you might spot howler and white-faced monkeys, armadillos, raccoons, sloths and small tree snakes. Don’t miss the crocodiles and iguanas near Manuel Antonio National Park. This is one of Costa Rica’s most popular destinations. One glimpse of the sweeping view -beaches, jungle, and shimmering Pacific dotted with rocky islets will take your breath away. 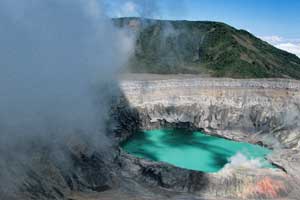 The best way to experience La Paz is to leave San Jose early in the morning, drive 30 min to the summit of Poas Volcano, and visit the volcano BEFORE you visit La Paz. The main crater of Volcano Poas is more than 160 m across and 30 m deep with an acid lake and a lava dome within.

Poas Volcano's huge crater attracts scientists and tourists from around the world. The zone immediately around the crater is barren due to continuing sulphur emissions and periodic acid rain generated by the volcano's activity; the rest of the park exhibits areas of thick vegetation.

La Paz Waterfall Gardens is absolutely spectacular! It features the World's largest butterfly observatory, hummingbird and orchid gardens, and well laid out and safe trails along the La Paz River with 5 large waterfalls.  This is likely what you expected Costa Rica to be: lush, verdant green rain forest, lots of colorful birds, flowers and butterflies. 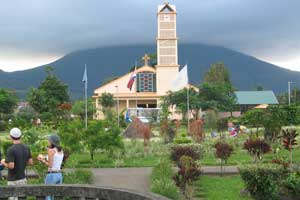 Costa Ricans, as any other people, are complex and full of surprises. The country boasts a population close to 3.5 million people, which by standards of the region, is not large at all. Most Ticos are extremely polite and like to maintain a polite distance. Hospitality, takes top priority. Guests enjoy many more privileges and far more freedom than their hosts. The background of such hospitality is the unwritten law of the Ticos: behave yourself well and make a good impression. When walking about San Jose, use common sense as you would in any major city. The smaller towns present a much more relaxed atmosphere.

Biological diversity is the living wealth of Costa Rica. Only in the last two centuries have billions of years of nature's work been rapidly transformed by man. Our impact upon the Earth's biodiversity has been greater than any other species.
The National Park system of Costa Rica was created more than 30 years ago and today more than 25 percent of Costa Rica's territory has been designated either as National Park land or some kind of biological reserve, wildlife refuge or wildlife corridor. With the establishment of their National Parks, the people of Costa Rica decided to preserve their beautiful and bio-diverse areas for future generations. 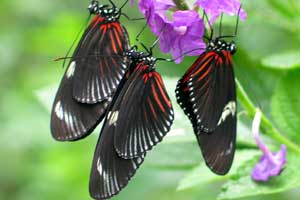 Danaus Gardens is a project for the Conservation of biodiversity. In this park you will find different kind of animals, butterfly, frogs and birds as well as a private nature reserve and educational trail. On a guided visit, you will learn about local environment protection efforts and the project's importance for the ecosystem. They also run a tree nursery for rare local species. Monteverde Cloud Forest Reserve is one of the premiere wildlife refuges in the country. It shelters ocelots, tapirs, colorful insects, butterflies and birds, including the metallic-green resplendent quetzal, which is seen mostly during its March-April nesting season. 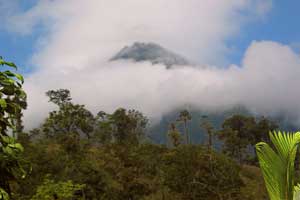 The majestic Volcano Arenal in Costa Rica stands alone on the plain, a powerful cone rising against the horizon. The area around the volcano offers a multitude of activities for adventure and nature lovers. In our stay we were awakened at 2 am by the booms of the erupting volcano as shown in the photo gallery.

The Manuel Antonio National Park and the area surrounding it are one of the most beautiful destinations in Costa Rica. An evergreen forest providing shade from the tropical sun outlines two beautiful white beaches. Several trails lead through dense jungle growth to hidden sandy coves and magnificent lookouts over the ocean and beaches.

The views from the hills overlooking Manuel Antonio are spectacular and its jungles are crawling with white-faced and squirrel monkeys that will make off with your lunch if you are not careful. Despite its small size and great popularity, Manuel Antonio manages to remain one of the premier nature spots in the country. The mountains literally meet the sea here and the ecosystem is teeming with land, sea and air species. If there is one place to visit in Costa Rica and be assured of seeing animals in the wild, this is it. The town of Quepos with its shops and restaurants lies  a short distance away.