Earth packed and rocky in places with some undulating hills

The DeCew Falls to Rockway Falls hike takes in seven waterfalls. DeCew Falls derives its name from John DeCou (the name was variously spelled by his relatives and descendants and latterly as DeCew), one of the pioneer settlers in the district. Born of English stock in Vermont in 1766, he came to Upper Canada as a young United Empire Loyalist in the years following the American Revolution. He married Catherine, daughter of Frederick Docksteter of Butler's Rangers in 1798 and they had 11 children. In 1788, he secured a number of lots adjacent to the falls on the Beaver Dam Creek. He built several mills near the falls and laid the foundation for what became a flourishing settlement. 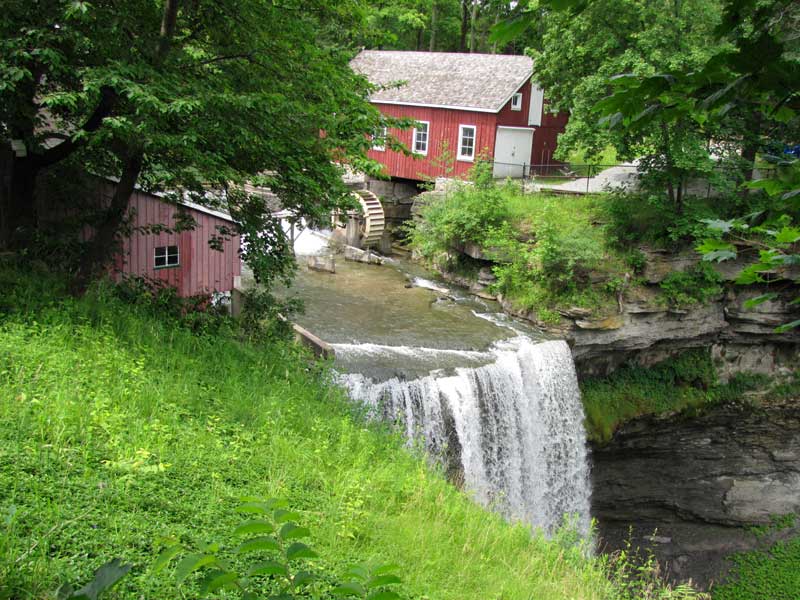 DeCou served as a captain of the militia in the War of 1812. He was taken prisoner during the capture of Niagara and Fort George on May 27, 1813. During the same year; the tide of battle turned against the British who were forced to retreat to Burlington Heights, Hamilton, leaving only a small force at the John DeCou stone house under Lieutenant James Fitzgibbon.

On June 23 that year, in the Village of Queenston, Laura Secord, wife of James Secord, heard American soldiers, billeted in her home, discussing plans to overpower Fitzgibbon's party. She took counsel with her husband, who was ill at the time, and they decided that she should make the perilous 32 km (20 mile) journey on foot to warn Fitzgibbon.

Unaware that she was embarking on such a famous trek, she stole quietly away from the house, reaching St. David's by sunrise on the following morning where she was joined by a niece, Elizabeth Secord. To avoid American patrols, the two women followed an old Indian trail from St. David's to Shipman's Corners (now the intersection of St. Paul and Ontario Streets in St. Catharines).

From this point the Canadian heroine hurried on alone to the DeCou House. Acting on her warning, Fitzgibbon and his men, with their Indian allies, captured the entire American force, with its Commanding Officer; Lieut. Col. Charles C. Boerstler, by bold strategy. That action, now known as "The Fight in the Beech Woods," was an important turning point in the war. Thus did Laura Secord and the stone house of John DeCou take their places in the bright pages of history.

DeCou escaped in 1814, participating in the Battle of Lundy's Lane. After the war, he restored and developed this property, and the area became known as the Hamlet of Decew Town (now DeCew Falls). He advocated and became a director of the First Welland Canal. When the route was changed leaving the mills without water power, he became an opponent of the scheme. He sold his house in 1834. He died in 1855 at DeCewsville in Haldimand County, the second community of which he was the founder.

The DeCew stone house was occupied by David Griffiths and his descendants until 1942 when it, with the surrounding property, was acquired by the Hydro-Electric Power Commission of Ontario for the extension of the DeCew Falls generating station.

In 1950, while unoccupied, it was destroyed by fire. In view of its intimate association with Canadian history, steps were taken to preserve the remains of the house.

A flagstone floor was built and the existing Queenston limestone walls, 66 cm (26 in) thick, were left intact to the height of the ground floor window sills. Grounds around the house were landscaped and new stone piers were erected at the two driveway entrances.

A large bronze plaque, recording the interesting history of the old house, was set into a cairn-like structure, forming part of the back wall of the venerable structure.

On October 13,1953, the property was officially declared an historic site by the Hon. Leslie M. Frost, Prime Minister of Ontario. Participating in the ceremony along with Premier Frost was former Hydro-Electric Power Commission of Ontario Chairman Robert H. Saunders who said the preservation of the DeCou House by the Commission was in keeping with its policy of restoring and maintaining historic landmarks situated on the properties, as a tribute to the pioneers who laid the foundations of the nation.

Cataract Power Company of Hamilton - In 1886, the transmission of electricity over long distances for commercial purposes was still in much of an experimental stage. After numerous surveys and the examination into the physical feasibility of using DeCew Falls, a scheme was developed for the generation of electrical energy. As a result of this scheme John Patterson, the Hon. J.M. Gibson, John Moodie, James Dixon and J.W. Sutherland procured a charter dated July 9, 1896 and formed the Cataract Power Company of Hamilton Ltd. for the purposes of developing this power and transmitting it 56 km (35 miles) to the city of Hamilton.

On securing the water lease, the company then entered into a contract with the Royal Electric Company of Montreal, dated December 8,1897. This company undertook the electrical engineering and designed the plant.

During the early years, the station was sometimes referred to as the "Power Glen station" because of its close proximity to that area.

If you love viewing and photgraphing waterfalls, then you will love this special hike that takes you past seven waterfalls (and perhaps eight with a slight detour.) The main DeCew Falls at the Morningstar Mill is a great site. Don't forget to take a tour of the mill and walk down the steps to the lower level where a window looks outright at the edge of the crest. From this vantage point, you can see the force of the water rushing by. Another great waterfall is Swayze Falls which is best to view in Spring when creek levels are high. Rockway Falls is another impressive waterfall and there are a few others nearby to view as well.