18.2 km which includes all loops

Rolling undulating hills with some steep climbs and descents.

Covered tables at the Trail centre

Some of the loops can be omitted.

The Dundas Valley Conservation Area is a great place to hike. The views are magnificent and constantly changing from beginning to end. The area occupies about 1200 ha of Niagara Escarpment country on the western edge of Hamilton. All told there are some 50 km of hiking trails within the CA. The trails wander through lovely stretches of Carolinian forest traversing deep stream valleys and high ridges that provide superb lookout points. Many species of birds and wildlife can be found here. As well there are a number of historic sites within the area. Enter from Governors Road.

This was a large residence situated in Ancaster, Hamilton, Ontario, Canada which now exists as ruins and is part of The Hermitage and Gatehouse Museum maintained by the Hamilton Conservation Authority. The location is a popular destination for hikers and people interested in the paranormal. 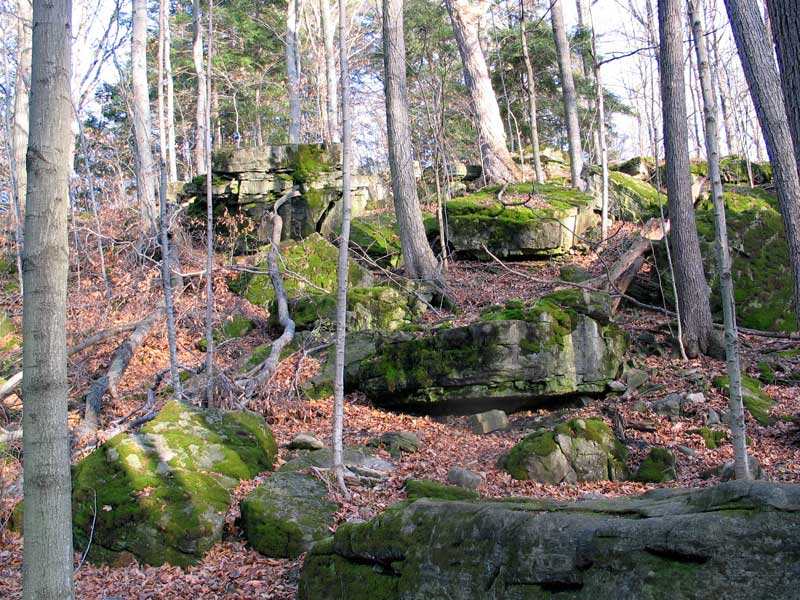 In 1853 the Hermitage was purchased by George Gordon Browne Leith (1812-1887) and his wife Eleanor Ferrier (1814-1900). Over the next several years, a large stone house, attendant outbuildings, a farmhouse, barns, and entrance lodge were constructed. After Mrs. Leith's death, the property was purchased by her youngest daughter, Eleanor Alma Dick Lauder (1854-1942). She lived here until the house was destroyed by fire in 1934, and afterwards, in a small house constructed inside the ruins.

Otto Ives (1804-1835),an English officer was the third land owner. He met Magdalene Diamanti, a daughter of the Governor of an Aegean island. They married in Corfu in 1824, and had arrived in Ancaster by 1833. They brought her sister or niece with them to act as a companion for Mrs Ives. It was here that Otto Ives purchased the Hermitage from the heirs of the Rev. George Sheed. Ives had hired a coachman by the name of William Black.

The ladies of the household spoke only Greek, and it is said that Black fell in love with the sister or niece. Black went to Otto Ives and asked for his niece's hand in marriage. Ives was very upset by the thought, and rejected the proposal. The next morning Ives and his wife were to go out for the day, but the coachman was not at the front door with the carriage as planned. Ives went out to the barn to see why the coachman had not appeared, and discovered Black's body dangling from the rafters in the barn near the first Hermitage.

Although this story has become legend in Ancaster, and although Otto Ives owned the Hermitage in the 1830s, there is little other information from the time to substantiate the legend of the coachman and the niece's love affair. There is also a note appended to deeds of sale, mentioning that a family friend had hanged himself from a tree in the bush, because of love for the niece. This is a more likely scenario. Perhaps further research will provide an answer.

The land, (now owned by the Hamilton Region Conservation Authority) still whispers with voices from the past. It has been said that the woods surrounding the ruins are haunted. Old vines and trees groan loudly in the wind, wildlife is scarce and there is a dread in the air that can make you shiver in fear.

The Dundas Valley Headwaters Trail is a great hike that passes many of the significant attractions of the Dundas Valley Conservation Area and manages to add a few gems of its own along its far loop. Conservation Halton declares the CA, "a favourite destination of any outdoor enthusiast" and I'd have to agree with that. Add to that the valley's 1,200 hectares of Carolinian forests, fields, cold-water streams and stunning geological formations that are home to an array of rare plants, birds and wildlife and you have one great destination.