What are Ontario Wetlands? 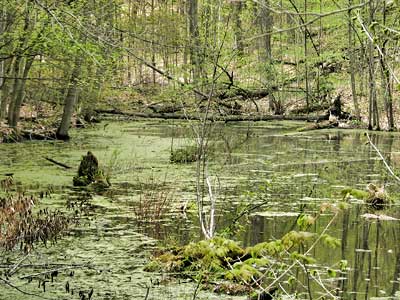 Ontario wetlands include many different habitats such as marshes, swamps, ponds, and peatland bogs. These are areas where water covers the land for a significant part of the time. Plants and animals present in wetlands come from both land and water habitats making them highly productive environments.

A wetlands classification system was developed by the Canadian National Wetlands Working Group in 1988. This system recognizes five main wetland classes in Canada: bogs, fens, marshes, swamps, and ponds. Each of these classes of wetland is further divided into subclasses based on surface conditions, area drainage, nearness to water bodies, and area vegetation. 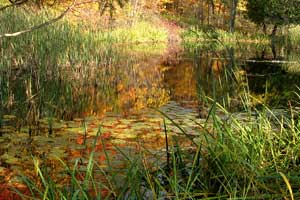 Marshes are defined as wetlands frequently or perpetually covered with water. They are characterized by emergent soft-stemmed vegetation adapted to saturated soil conditions. Emergent plants have their leaves above water level and their roots in the soil below. There are many different kinds of marshes, but all types receive most of their water from surface water, and many marshes are also fed by groundwater. Marshes contain shallow water varying from 15 to 90 cm in depth. Nutrients are plentiful and the pH is usually neutral leading to an abundance of plant and animal life. Very large areas of open water are uncommon and islands of vegetation are often present. Marshes are the most common wetland type in North America.

Marshes moderate stream flow by providing water to streams - an important function during periods of drought. The presence of marshes in a watershed helps to reduce damage caused by floods by slowing and storing flood water. As water passes slowly through a marsh area, sediment and pollutants settle to the floor of the marsh. Marsh vegetation and microorganisms also use excess nutrients (such as nitrogen and phosphorus from fertilizer) for growth that can otherwise pollute surface water. This wetland type is very important to preserving the quality of surface waters.

Because of their high levels of nutrients, freshwater marshes are one of the most productive ecosystems on earth. They sustain a vast array of plant communities that support a wide variety of wildlife within the wetland. As a result, a marshes sustains a diversity of life that is way out of proportion to its size.

These habitats can be found along the shores of the Great Lakes and in sheltered bays such as Cootes Paradise and also along rivers or in other depressions across the broader landscape. They have fluctuating water levels, particularly when they are isolated from large water bodies. 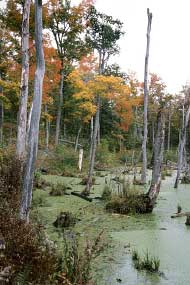 A swamp is a wetland type associated with streams, rivers or lakes which has water flowing through it. They are often confused with marshes but are distinguished by the presence of trees and shrubs. Swamps occur on saturated soils and are flooded for most or all of the growing season. The main swamp region in Ontario occurs in the Great Lakes region.

A swamp is any wetland dominated by woody plants. Swamps are characterized by saturated soils during the growing season, and standing water during certain times of the year.
The highly organic soils of swamps form a thick, black, nutrient-rich environment for the growth of water-tolerant trees such as cypress and some types of white cedar. Most of our Southern Ontario swamps are dominated by hardwood tree species such as Red Maple and Silver Maple. Some swamps are dominated by shrubs, such as button bush or smooth alder. Plants, birds, fish, and invertebrates such as freshwater shrimp and crayfish need the habitats provided by swamps.

Swamps are forested wetlands and the Hamilton area is one of the best places in Canada to see them.  These wetlands can form along lakeshores but are more often found along shallow rivers or in low-lying areas where the soil is not flooded all year long. 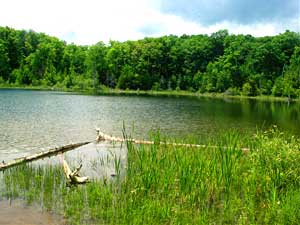 Small bodies of shallow open waters of standing or gently flowing water represent a transitional stage between lakes and marshes. They are called ponds and vary greatly in physical and chemical composition. Their mid-summer depth is less than 2 m and open expanses of water comprise at least 75% of their area. Their surface is generally free of vegetation. Unlike lakes, the water temperature in shallow open waters is uniform, lacking any stratification.

The rarest wetlands in southern Ontario are the peatland bogs where the soil is highly organic because is it formed almost entirely from incompletely decomposed plants. This soil is called peat and it’s presence gives rise to the term “peatlands”. In such waterlogged conditions, the plant material is very slow to decompose. Common plants that dominate peatlands, such as Sphagnum mosses or sedges, are particularly slow to decompose. The Summit Bog at Copetown, is 12,000 years old and has peat soil that is 8 metres deep.  This indicates that it takes 500 years to form 30 cm (1 foot) of peat. Near Port Colborne on Lake Erie can be found the remaining sections of Wainfleet Bog, a once massive peat bog now much reduced by drainage and development.
Still, the 1,000-acre Wainfleet Bog is  the largest remaining peat bog in Southwestern Ontario. 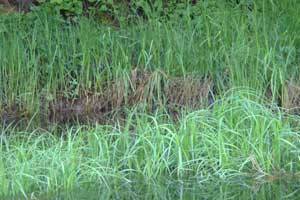 Fens are wetlands that are mostly made up of a group of grass-like plants with triangular stems, called sedges.  They occur where you have slightly acidic or alkaline water.  Rare Ontario wildflowers such as orchids require the unique acidic water chemistry of fens to be able to grow and prosper.  Trees in this type of wetland are usually tamarack or cedar. Fens are uncommon in Southern Ontario.

Because they are not very productive, fens support relatively small populations of animals, although their associated open-water habitat may be used by breeding ducks and geese.

yoasd
This comment was minimized by the moderator on the site