Hilly in places with some attractive open meadows mixed in with dense woods and two waterfalls.

At Hoggs Falls and area (no tables)

The Eugenia Falls to Hogg's Falls hike takes in both waterfalls and some interesting countryside in between. Situated in the very tiny village of Eugenia, Eugenia Falls Conservation Area encompasses 23 hectares of Niagara Escarpment, river valley and upland forests. The site features hiking trails, a picnic pavilion, privies and a war memorial, as well as the 30 metre tall waterfall. 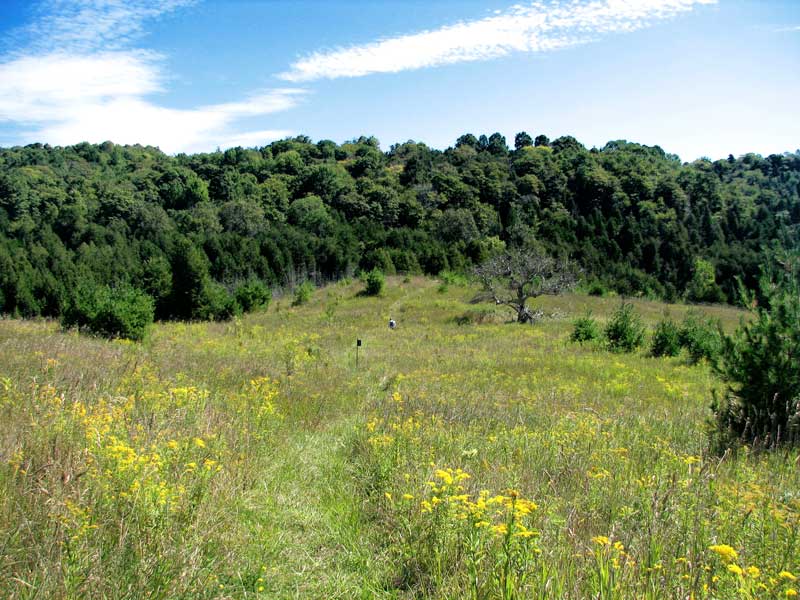 Unfortunately for falls lovers, the river is diverted for power generation, resulting in a pretty low flow in summer. As with most falls it is best seen in the spring.

When first discovered in 1852, Eugenia Falls was the scene of a 'Fools Gold' rush. Later it became the location of five mills and a small private electric plant and by 1905, it was chosen to be the site of the second hydroelectric plant in Ontario (Georgian Bay Power Company). In 1915, Ontario Hydro moved the plant to the north and created Lake Eugenia, allowing more control over water levels.

The waterfall was called Eugenia following a suggestion from some ex-soldiers of the French army (Crimean War) who were working with Charles Rankin surveying the former Artemesia Township. They suggested that the waterfall be named after Princess Eugenie, wife of Napoleon III.

The hike begins at Eugenia Falls and follows a new trail opened in late 2006. This is a large loop that takes you through woods and meadows to the Hoggs Falls trail loops and then returns in part along Lower Valley Rd. Be sure to visit the Eugenia Falls Emporium across from the Eugenia Falls parking lot where John & I had coffee and frresh-baked pastries. After taking photos of John standing at the crest or Eugenia Falls. We followed the winding trail along the edge of the 'Cuckoo Valley', with excellent views of the 30 metre high waterfall as we walked by a war memorial and picnic shelter. There are interpretive plaques along the fieldstone wall that provide background on the historical importance of the Beaver River. Hogg's Falls is a small but beautiful falls and we enjoyed watching fishermen in hip waders fishing near the base of the falls.