Fee parking only at Inglis Falls

Restaurants and stores along the way.

At Inglis and most other falls

Some trails are wheelchair accessible

All of the falls are especially interesting when waterflow is a maximum in early spring. 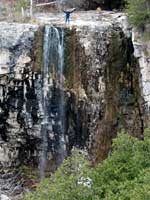 Eugenia Falls presents a breathtaking view as the Beaver River plunges 23 m over the escarpment edge into Cuckoo Valley below.

When first discovered in 1852, Eugenia Falls was the scene of a 'Fools Gold' rush. Later it became the location of five mills and a small private electric plant and by 1905, it was chosen to be the site of the second hydroelectric plant in Ontario (Georgian Bay Power Company). In 1915, Ontario Hydro moved the plant to the north and created Lake Eugenia, allowing more control over water levels. Unfortunately most of the water is now diverted through huge pipes leaving a trickle to flow over the falls. But even this is spectacular. The waterfall is said to be named after Princess Eugenie, wife of Napoleon III. 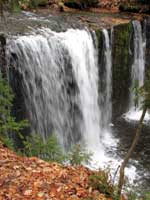 In the steep-sided and narrow upper Beaver Valley can be found what is considered to be one of Grey County’s best-kept secrets. A short walk brings you to where the Boyne River cascades 7 m over the rock face to form a sheer and shimmering curtain of water. A face of hard caprock keeping the falls from eroding. The water level is reasonable most of the year.

Only faint traces remain of William Hogg's long-ago mill with much of the land today reclaimed by the forest. The site is now protected as a forest reserve managed by the Ontario Ministry of Natural Resources. The clear waters of the river abound with speckled trout and other species and fishing is permitted, in season, within the 83 hectares of posted public lands. Hogg’s kin were millers in several Ontario communities including Hogg’s Hollow In Toronto. 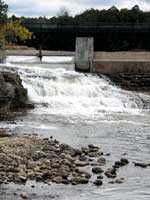 Durham Conservation Area covers over 61 ha (150 acres) including over 3 km of Saugeen River frontage. Scenic McGowan Falls is one of the highlights of this beautiful park. McGowan Falls take the name of an early miller who used the water power of the Saugeen River at this site. McGowan Falls are portrayed in one of several murals that adorn buildings in downtown Durham. The falls here are more gradual than some with a drop of between 1 -2 m, yet still scenic in their setting of cedars.  Unfortunately a walkway bridge built right over the crest spoils the view -one only wishes it was placed elsewhere.

A wide variety of activities can be enjoyed year-round within the park, by both campers and day-users. Facilities include picnic shelters,  shower and washroom facilities as well as a trailer amenities. 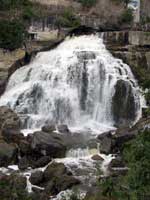 Of the three waterfalls near the City of Owen Sound, Inglis Falls is the best known and most visited. Situated in the heart of the 200-hectare Inglis Falls Conservation Area, Inglis Falls is an 18 m high cascade falls where the Sydenham River meets and tumbles over the edge of the Niagara Escarpment.

This is an exceptional waterfall that will amaze you with its size and the fact that it is really a series of smaller falls each falling into the other all the way down. There is a good supply of water year round. The erosive power of the water has carved a deep gorge at the base of the falls. On a clear day you can see down the valley into the City of Owen Sound and out to the Owen Sound harbour.

There is a viewing platform,  over 7 km of trails of various difficulty, access to the Bruce Trail, more than 20 species of ferns, bird watching opportunities, a series of geological potholes, historical remains of a grist mill and water filtration plant, picnic facilities and a gift shop for refreshments, gifts and used books. 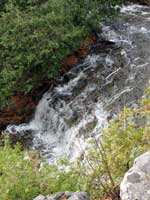 Scenic Jones Falls is located on 116 hectares of Niagara Escarpment land. Cascading 12 meters over the escarpment, the Pottawatomi River eventually makes its way to Owen Sound Bay on Georgian Bay. You can view the falls year round and even in the summer with diminished water, it is still worth viewing.

A 1 km trails lead the hiker to a vantage point providing a breathtaking view of the surrounding lowlands and Jones Falls. You can join and follow the Bruce Trail further along the brow of the escarpment, or hike the alternate trail system provided.

This site contains various trees and shrubs ranging from Wild Rose to hard maples. Great white trillium and columbine are among the wildflowers that can be found. Cliff Swallows, Pileated woodpeckers, porcupines and woodchucks are common to the conservation area, as are garter snakes and painted turtles. 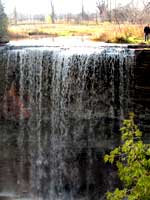 This is one of my favourites with a curtain of water from the Indian River flowing over the horseshoe shaped waterfall. In hot summer weather as the creek dries up, the waterfall changes from a curtain to a ribbon falls named after the Newash Indian tribe who lived in this area at one time. The 15 m high waterfall was formed by the erosion of soft Queenston shale beneath hard Manitoulin dolomite, in a manner similar to Niagara Falls.

From the parking area, an 800 m trail with a rigorous climb to the waterfall follows the Indian River, providing many opportunities to view a variety of tree, fern and wildflower species and wildlife. There is a great view of the Indian River below as the trail passes through a stand of birch trees. Soon you will hear the sound of the falls and it will take your breath away when it comes into view. 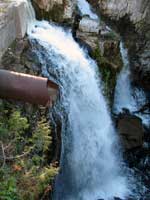 Walter’s Falls is located on private property in the tiny village of Walter’s Falls. There is a viewing platform where Walter’s Creek plunges 14 m over the escarpment. It’s hard to see what is left of the original waterfalls when a dam structure has been built on top of the crest to control the water flow. This was somewhat of a disappointment after the other six “magnificent” falls. Still the flow was high.

Named for the pioneer John Walter and his family, the quaint settlement developed around the gristmill. A new large resort is opening adjacent to the falls.

The dam keeps a good water supply year round.