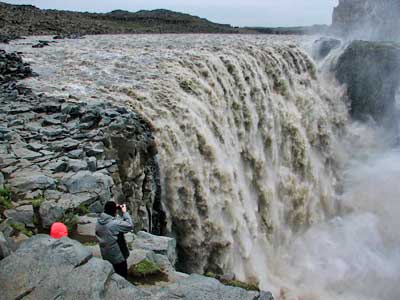 The volcanic eruption in Eyjafjallajokull glacier in 2010 was only localized to a small part of the country - directly affecting only around 2 dozen farmsteads or so. Day-to-day life continued in Iceland apart from the directly affected area in the south, businesses and society functioned normally and the volcano posed no safety threat to the people in Iceland.

In 2008, Iceland embarked on a nature conservation project on a hitherto unparalleled scale with the establishment of the 12,000 sq km Vatnajökull National Park. Few if any regions in the world offer such a mixture of dynamic ice cap and outlet glaciers, geothermal energy and frequent sub glacial volcanic activity, coupled with outburst floods. And don't ask me to pronounce any Icelandic words -I don't think anyone can.

Initially, the park will include some areas already under protection, such as the Skaftafell and Jökulsárgljúfur National Parks, Lónsöræfi wilderness and Vatnajökull glacier, which is larger than all the other glaciers in Europe combined. Already occupying about 12% of the country, the park boundaries are expected to expand in the coming months and years, so as to offer a unique opportunity to observe the wide-ranging impact of the Vatnajökull glacier on its surroundings, in which ice and fire play leading and often complimentary roles. While I have not visited this new national park, other national parks are included in the slide shows.

The New York Times chose Iceland as the 4th best place to visit in 2011 (behind Chile, San Juan Islands, and Thailand.) 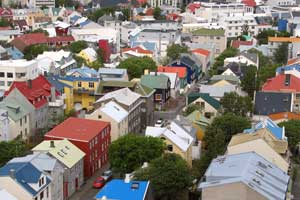 Half the country’s population live in the capital, Reykjavik, enjoying fresh air and a great location between the bay and the mountains and glaciers of the interior. The streets are narrow but there are no traffic jams or crowded streets. Husavik is a small “whale-watching” village in the North nestled among high cliffs and facing out over the Arctic where you are almost guaranteed a sighting.

Without a doubt the best out- door bath on the planet is the Blue Lagoon. The lagoon is a pool of seawater heated by the geothermal activity below the surface. Situated in the middle of a lava field, the water contains a  cleansing mixture of salts, silica and blue-green algae to soften the skin and relax the body.  Simply wonderful! 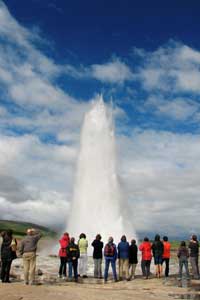 First to Thingvellir National Park, “Symbol of the Icelandic Consciousness”, which is in a rift valley between the American and European geological plates and Lake Thingvellir which contains species of fish found nowhere else. This is the site of the original Parliament established in 930.

Then a visit to the 32 m high Gullfoss (Golden Falls) followed by a hike around Nesjavellir with its geothermal areas of sulphur pools, bubbling mud, and geysirs. After a tour of the geothermal plant, its off past a herd of Icelandic ponies and on to the Kerio crater and the Godafoss waterfall. The waterfall of the gods got its name when Iceland converted to Christianity and pagan carvings were thrown over the falls. 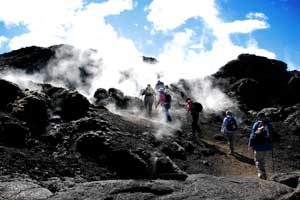 Beginning in Jökulsárgljúfur  National Park, we hike past Echo rocks which are the remains of ancient volcanoes eroded by the Jökulsá River. We climb to the top of Rauðhólar for magnificent views of the Ásbyrgi Canyon (dubbed Iceland’s Grand Canyon) before heading off to view Dettifoss, Europe’s most powerful waterfall.

The next day it’s off to the Myvatn area to hike through the Krafla volcanic region to the Viti Crater (Hell Crater), an explosion crater where a lake has formed. We continue on to the Leirhnjukur crater for boiling mud holes and a walk through jet-black lava fields. A stop at Hverir reveals more bubbling mud pool and screaming vents of steam escaping from the earth’s interior.

The Flowers of Iceland 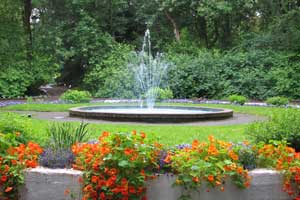 This album is a collection of the wild and domestic flowers found in Iceland all photographed in extreme closeup. The first quarter of the album features colourful wild plants found on various hikes through the harsh environment. The remaining photos were taken at the Botanical gardens in Akureyri.

The gardens were begun by a Danish woman in 1912 to provide a relaxing environment but the current collection dates form the 1950s. There are species from southern Europe, Africa, South America and Australasia, as well as examples of just about every variety that will grow in Iceland. The garden are well kept and still provide a haven of calm.

Update: While most of us visited the gardens, a few hardy souls attempted the trek up fog-shroudded Mt Sulur. “We still had another 45 min to the top, but it was getting so thick we couldn't see each other, so decided it was time to turn back.” Thanks to Joan Burton for these four pix in the photo album slide show.