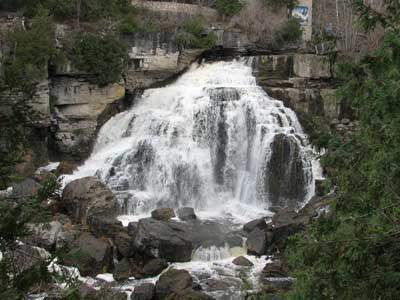 Inglis Falls (Rating=A), situated in the heart of the 200-hectare Inglis Falls Conservation Area, is an 18 m high cascade falls where the Sydenham River meets and tumbles over the edge of the Niagara Escarpment. Of the three waterfalls near the City of Owen Sound, Inglis Falls is the best known and most visited.

Inglis Falls is located in the Inglis Falls CA near Owen Sound, Ontario off Hwy 6 near Grey Rd 18.
Falls Type: complex cascade    Falls facing: NE
Falls Latitude: N44.52615    Longitude:W80.93432
Height: 21 m    Width: 7 m
Click on the Road Map button below for a Google map and directions. The Falls Locator button shows a map of other waterfalls in the area.

There is a pay parking lot beside the falls which is wheelchair accessible. Click on the Trail Map button below for area walking trails. WINTER: Plowed regularly in winter. You can also park at the Grey Sauble Conservation Authority Headquarters just north on Inglis Falls Road and hike/snowshoe uphill from there.

Waterflow: A -year round flow from Red Hill Creek
Falls Size:  A -15 m
Aesthetics: A -beautiful; this waterfall has it all 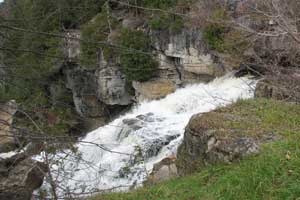 There is a large parking lot at the top of the falls. This is an exceptional waterfall that will amaze you with its size and the fact that it is really a series of smaller falls each falling into the other all the way down. There is a good supply of water year round. The erosive power of the water has carved a deep gorge at the base of the falls. On a clear day you can see down the valley into the City of Owen Sound and out to the Owen Sound harbour. There is a viewing platform, over 7 km of trails of various difficulty, access to the Bruce Trail, more than 20 species of ferns, bird watching opportunities, a series of geological potholes, historical remains of a grist mill, water filtration plant, picnic facilities and a gift shop for refreshments, gifts and used books. There are also decent washroom facilities. The Grist Mill was established five years after the founding of Sydenham Village (now the City of Owen Sound) by Peter Inglis. Inglis was a young Scotsman who saw the potential of capturing the power of the Sydenham River cascade. He purchased a small existing grist mill at the foot of the falls along with a large tract of land. Seventeen years later in 1862, Inglis replaced the old mill with a new four-story mill to produce bran, flour and animal feed. He also built a sawmill downstream from the falls as well as  a woolen mill on the east side of the river at the side of the crest of the falls.

The woolen mill was destroyed by fire in 1885 and was rebuilt but burned down again in 1901. The mill passed on to his oldest son, William, in 1886. Then Willian's son managed the mill until 1932 when the property was purchased by the city of Owen Sound for water rights. In 1960, Grey Region CA acquired the property that is today Inglis Falls Conservation Area. The millstones from the original mill are on display in the park.

Bruce Trail, Harrison Park Side Trail, Keeling Side Trail, local trails. For a map of area trails, click on the Trail Map icon above. 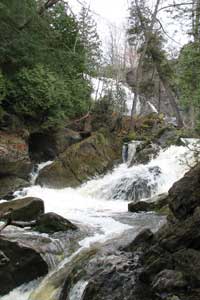 From the parking lot, Inglis Falls is straight ahead and the roar is unmistakable. To the left of the falls as you view them from the parking lot, head to the right and down the steps to a large wooden viewing platform. You can continue down to the woods below, scramble over a large rock formation and continue along the white-blazed Bruce Trail to where it comes out to the road. There is an area nearby where you pass through a channel between two large limestone blocks to get over closer to the falls on local trails not well marked or maintained. If you'd like to do a longer (6 km) loop hike in the area, you can continue along the Bruce Trail along the left side all the way up to Grey Road 5 where it connects with the Harrison Park Side Trail. The Bruce Trail along this section is hard packed natural terrain with numerous rocks, roots and natural obstacles making the trail moderate in difficulty. The trails within Harrison Park are relatively easy. There is also a 1.5 m fitness trail that winds along the escarpment above the Inglis River. You can drop into the Harrison Park Inn for a cold drink.

The side trail heads north and across the Inglis River to reconnect with the Bruce Trail. At this point turn right and head back along the Bruce Trail. The trail crosses the Sydenham River over a new metal bridge. During the spring and fall spawning season of salmon and rainbow trout, this bridge provides an excellent view of the fish as they head upstream. Continuing south, the trail makes a steep climb to meet the Keeling Side Trail and then returns to Inglis Falls.

FOR THE ADVENTUROUS ONLY:

At the spot mentioned above between the two large limestone vertical blocks, you can make your way down to the base of the falls. It's rocky and steep in places with some rock scrambling necessary. There is no well defined trail so you'll need to scout out the best route to descend. Closer to the falls it's way too steep to attempt a descent there. It has been reported that some have climbed the face of the falls during low water flow, but this would be foolhardy.