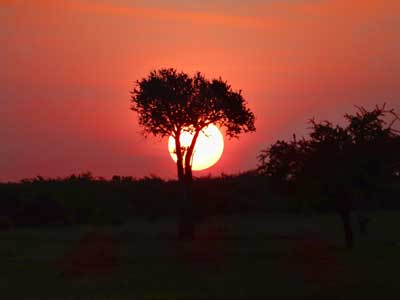 After a midnight arrival in Nairobi (July 1, 2012), we set off the next morning for Nyeri in Central Kenya to begin our walking safaris. The idea behind the walking safari is to be able to "watch" wildlife in relation to its environment by hearing, feeling and even smelling the bush as they do, and more importantly, experiencing even the small wonders of the African bush down to the small dung beetle. By "watching" wildlife, we get to see the highly specialized behavior of the animals in their natural habitat. 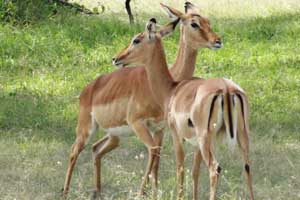 Sangare Game Reserve is a 6500 acres Private Wildlife Conservancy sandwiched between the Aberdares and Mt. Kenya. The Sangare Hill forms a magnificent backdrop for the camp. Sangare Game Ranch, whose habitat is open savanna with scattered bushes, is home to zebras, giraffes, antelopes, warthogs, leopards, hyenas, elephants and buffaloes. Bird life in Sangare is rich with over 300 bird species recorded such as Red-winged and Greater Blue-eared Starlings, Olive Pigeon, Northern Crombec, Grey Flycatcher and Cardinal Woodpecker... At the lake there is the easy-to-see Red-knobbed Coot, Black Crake, Storks and others.

Our walks over two days in Sangare were guided by a Ranger and we walked in the open plains and along the lake - this is where most of the plains game is found. You get close sightings of big herds of the resident waterbucks, elands, bushbucks, zebras, gazelles and giraffes.

Our third day was a walk in Solio Ranch which is another privately owned wildlife conservancy located in Kenya's Rift Valley Province. This ranch is a fenced, privately-owned protected area geared toward rhino conservation. The 17,500-acre reserve, 22 km north of Nyeri Town, plays a major part in the protection and breeding black rhinos in Kenya.

We ended our third day with an overnight stay at The Ark which is located in thick woodland at the heart of Aberdare National Park. The lodge is known as a ’Tree hotel’ which is uniquely shaped to resemble Noah’s Ark, with deck from which numerous balconies and lounges provide superb vantage viewing points. Unfortunately rain and heavy fog hampered our viewing. (See Album 2.)
60 photos:   Photo Album 1: Sangare & Solio Ranches

The Ark and Lakes Crescent and Elementaita -Days 5-7 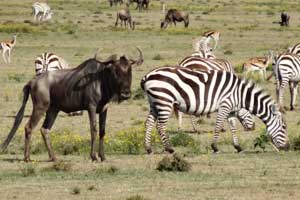 Leaving the Ark, we transfer from Central Kenya to the Rift Valley crossing the equator twice. The Rift Valley is known for its volcanoes, hot springs and soda lakes where pink flamingos wade in the shallow water. After lunch on the shores of Lake Elelmentaita, we arrive at the beautiful Lake Naivasha Country Club for a five nights' stay. The country club is located on 12 hectares of green lawns shaded by acacia trees on the shores of Lake Naivasha. Don't be surprised to see giraffes and zebras outside your door and hippos at night.

The next day it's off to the Crescent Island Game Conservancy which is a peninsula on the eastern side of Lake Naivasha. The terrain is flat and there is a lot of easy to see game e.g. giraffes, waterbucks, elands, wildebeests, zebras and impalas. It is also a heaven for birds with over 200 species recorded. The lake has a lot of hippos, which you can easily spot from the island.

The next day, a visit to Lake Elementaita offers a walking Safari occasion to appreciate nature, open space, water birds as you walk close to flamingos, pelicans, storks, plovers and others. Unfortunatley I slipped going downhill on some loose gravel and had to get medical attention for abrasion scuffing on my right arm. But, I still went dancing at "Thrills" that evening.

60 photos:   Photo Album 2: The Ark and Lakes Crescent and Elementaita 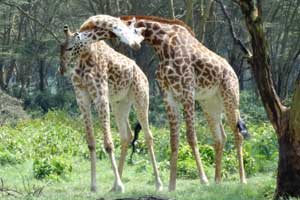 Hell's Gate National Park is one of the smaller national parks in Kenya. The Park has interesting topography of open savanna plains surrounded by huge volcanic rock boundaries. There are camphor and acacia trees all over and this is where to look for giraffes as they mainly feed on them. Walking in Hell's Gate can be divided into 2 sections - the first 9 km which is on flat terrain and the Hell's Gate gorge, which is accessed by descending into a steep canyon with running water from geysers and wild vegetation. In the Side Gorge, which is only accessible during the dry periods, the rocks have split to leave only a walking path. Due to my sore arm, I wasn't able to descend all the way into the gorge so the 6 gorge photos are courtesy of Karla Rabusch.

Crater Lake Game Sanctuary gets its name from the "Crater Lake", which is a green alkaline lake at the center of an extinct volcano. It is a lesser lake in the Rift Valley but a place where nature is at its best, with the algae-rich green lake contrasting very well with the pink from flamingos which are residents in the lake. Besides the flamigos, the Park has over 170 species of birds. We did an energetic walk on the rim of the crater, which though rocky, gives a wide view of the lake below. We wound up our hike on this very hot day with a descent to the Lodge on the shores of the lake and a well-deserved cold beer. 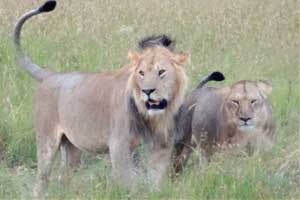 Maasai Mara (Masai Mara) is known as Africa’s Greatest Wildlife Reserve, situated in southwest Kenya. Famous for the abundance of lion, the Great Wildebeest Migration and the Maasai people, well known for their distinctive custom and dress, it is without a doubt one of Africa’s most famous safari destinations.

Masai Mara National Reserve stretches 1,510 sq km (580 sq miles) and raises 1,500-2,170 meters above sea level. The terrain of the reserve is primarily grassland and riverine forest with clumps of the distinctive acacia trees. It’s about 270 km from the capital city Nairobi and takes about 5-6 hours by road -three of these on the roughest road you've ever travelled on.

The Masai Mara Ecosystem holds one of the highest lion densities in world and this is where over TWO MILLION Wildebeest, Zebra and Thomson's Gazelle migrate annually. It hosts over 95 species of mammals and 570 recorded species of birds. Because there are predators in the park, these were all game drive safaris in our Jeeps with little walking. Some of us took the opportunity to go on an early morning hot-air balloon ride over the Masai Mara.