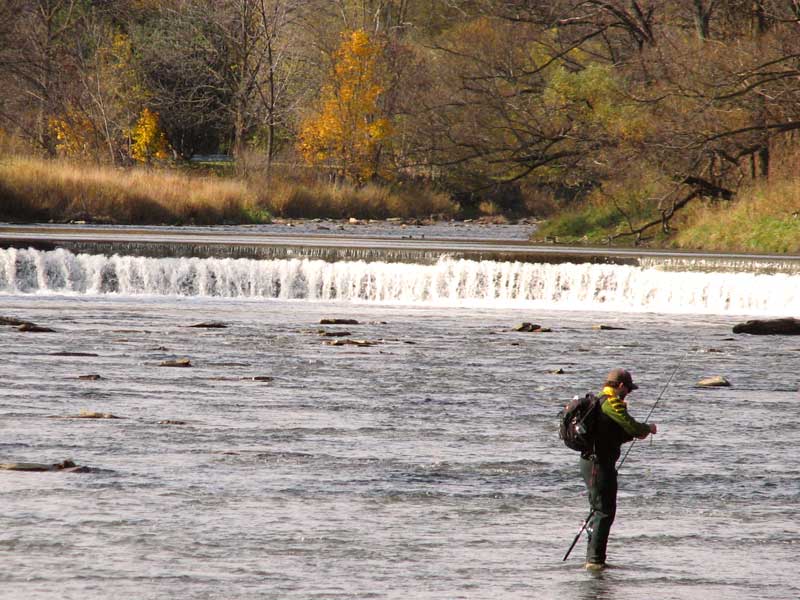 Fishing in the Humber River

This is a very pleasant peaceful walk along the Humber River. Much of the hike is on paved walking paths which makes the walk a good choice in wet weather. At Dundas Street, you can cross over the bridge and return on the far side of the river.

Anywhere along the banks of the Humber

The Humber River is one of two major rivers on either side of Toronto, the other being the Don River to the east. It was designated a Canadian Heritage River on September 24, 1999. A plaque commemorating this event is located in Brule Park.

The Humber collects from about 750 creeks and tributaries in a fan-shaped area north of the city. One main branch runs for about 100 km from the Niagara Escarpment to the northwest, while the other major branch starts at Lake St. George in the Oak Ridges Moraine near Aurora, Ontario to the northeast. They join north of Toronto and then flow in a southeasterly direction into Lake Ontario at what was once the far western portions of the city. The river mouth is flanked by Sir Casimir Gzowski Park and Humber Bay Park East.

The river valley is a natural home for birds and other wildlife. You may find signs of beaver activity along the river. Many types of wildflowers bloom in the valley from spring to fall. More than 25 fish species inhabit this part of the river and fishermen can often be seen in the shallow river casting their lines for pike, bass, perch, trout and salmon. In the fall, it's a great sight to see the salmon leaping over the notched weirs as they swim upriver to spawn.

Lambton Mills was established in 1807 when William Cooper purchased land and built grist, saw and woollen mills on both sides of the river close to Old Dundas Street. By the 1850s, Lambton Mills was a thriving community. W. P. Howland, who was a Father of Confederation, owned, with his brothers, all the Cooper enterprises and had built the Lambton House Hotel on the east side of the river. This hotel was a social centre for the area and a stagecoach stop along the Dundas Highway. It was restored and in 1997 designated a National Historic Site.

Hurricane Hazel hit southern Ontario with a fury on October 15, 1954 sending a wall of water 7 metres high down the Humber River Valley. Look for the plaque in Home Smith Park honouring five volunteer firemen who drowned in a rescue attempt during the flood.

001 - 002From the OLD MILL subway station follow the curved sidewalk to your right to the road and turn right on Old Mill Road passing the Old Mill Inn. Cross the bridge over the Humber River and turn left down the steps to the river side (002).

001 - 002Continue along the Humber River through Etienne Brule and Magwood Park until you meet a pedestrian/bike control gate (003).

003 - 004Climb a slight slope and follow a dirt path on the edge of the ravine. Much squirrel activity can be seen in this area and the thorny bushes make for an abundance of birds. The trail passes under the Dundas St overpass and arrives at a green bridge over the Humber River. Walk onto the bridge to enjoy the view (004). At this point we will return to a point where we can cross over the Dundas St overpass. [To continue ahead all the way to Lawrence Ave,  see hike W07].

004 - 001On the return pass under the Dundas overpass and take the path that leads uphill to Old Dundas Street . You will pass the historic Lambton House Hotel. Continue on to Dundas St. itself. Turn right and cross the Dundas St overpass. Just past the overpass take Old Dundas St on the right which heads downhill and turns right connecting with a park road along the Humber River through Home Smith Park. Look for the Hurricane Hazel memorial plaque on the left along the road. Continue along this road or walk on the grassy area closer to the river. The road climbs uphill and meets Old Mill Road once again. Continue straight ahead to the subway station (001).

Enjoy the walk and the day! 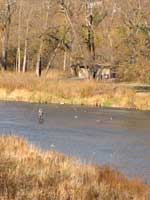 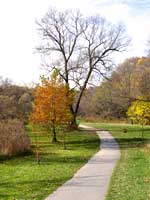 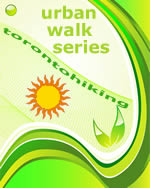