This is a linear hike of 15.1 km so car shuffling is necessary. For a return hike the distance is doubled by the same trail. To walk back by area roads instead, walk south on Twenty First St to Seventh Avenue. Then walk east to Seventeenth St. Head south to Staff Avenue and take Staff Ave to Eighth Ave. Turn left (east) onto Eighth Ave which becomes Pelham Road. Follow Pelham to the Rockway community centre where you began. The road route back is slightly shorter at 6.6 km and is a relatively flat but boring walk back. None of the roads are very busy but Pelham has regular traffic.

The Rockway Conservation Area is located along the Fifteen Mile Creek near the City of St. Catharines. This 126 ha site protects a portion of the Niagara Escarpment, the Rockway Falls, and the diverse flora and fauna of the Carolinian Forest. 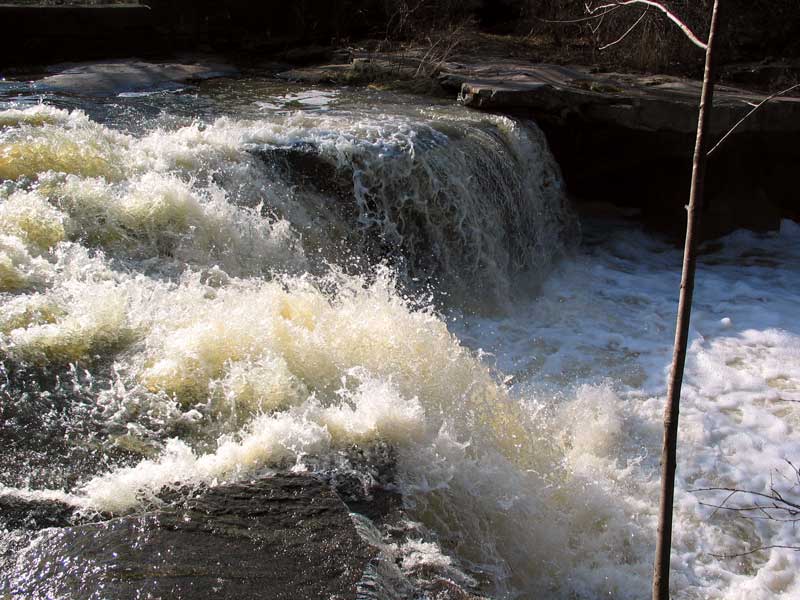 Rockway Falls encompasses an erosional notch at the edge of the Niagara Escarpment, probably created by solution of major structural elements in the (Silurian) bedrock that were enhanced by glacial erosion through several glacial periods. The falls are 18 m high, with a plunge basin over 3 m deep at the bottom of the falls, eroded into the Irondequoit Formation. Downstream about 70 m, a smaller falls has a height of almost 5 m and a plunge basin about 0.6 m deep at the base. The water course then continues to surge over a series of rapids to Rockway Lower Falls.

Some interesting flora can be witnessed at this location, for example, Jack-in-the-Pulpit, Witch Hazel, and Sycamore to name a few. The existence of a salt spring brings some historical significance to the area as it is thought to have been used as far back as 1792. Furthermore, it possesses the best quality and quantity of salt in the province.

Louth Falls is located in the Louth Conservation Area where Sixteen Mile Creek tumbles over the limestone of the Niagara Escarpment.  This small falls is located in a deciduous forest where the landscape develops when exposed limestone is eroded chemically by weak acids in precipitation. The shallow trenches you can see probably began as joints in the bedrock, which over time were enlarged by chemical erosion. This requires you to pay careful attention to where you are walking.

Ball's Falls Conservation Area is a historical park. The discovery and settlement of Ball's Falls resulted indirectly from the American Revolution. The remaining colonies that remained loyal to the British migrated North to Upper Canada in search of new homes. On October 13, 1807, 1200 acres of land was sold to John and George Ball beginning the Ball tenure of these historic lands which lasted for more than a century and a half.

Restored and maintained by the Niagara Peninsula Conservation Authority, the site occupies over 80 hectares (200 acres) of the original 480 hectares (1200 acres) purchased by the Ball brothers. George Ball constructed grist, saw, and woolen mills, which lead to the growth of one of the first communities in this area. The hamlet was known as Ball's Mills, Louth Mills, Glen Elgin, and finally as Ball's Falls because of the two delightful waterfalls on the property. In the mid 1800's, however, significant developments such as the railway and the Welland Canal led to the rapid growth of other villages below the escarpment, and by the turn of the century, most of the activity at Balls Falls had ceased.

The site lovingly restored to its early 1800's atmosphere, now features an operating flour mill, a lime kiln, a church, family home, blacksmith shop, carriage shed, and more. In addition to its historical interest, Ball's Falls is also a centre for nature activities, offering a tremendous diversity of flora and fauna as well as excellent exposures of geologic strata.

This hike takes the two previous hikes, L47 Rockway to Louth and L48 Louth to Balls Falls and combines them into one longer linear hike with some car jockeying necessary. But if you only have one car, you can do the two hikes separately.