about 10.2 km; 14 km with Cedar Trail loop to Meadowvale and back

This hike in the Rouge River Valley has a few steep climbs with one steep descent and some rolling hills. Some very nice lookout points and great scenery.

Upgraded trail signs/markings; Riverside Trail closed due to erosion of trial. Trail map has been redone to show hike trailhead at Glen Rouge campground due to expensive parking near Pearse House during the Panda exhibiton at the nearby zoo.

Cedar Trail can be added or removed (as can the Mast Trail) depending on where you choose to begin the hike.

The Rouge River is part of the Rouge National Urban Park which is the largest urban park in North America. It is one of a few wilderness areas left in South-Central Ontario, and has been close to being untouched by development since the arrival of Europeans. The park is surrounded largely by agricultural land with the exception of some exclusive private properties on the southern edge. It lacks recreational development but sports a considerable network of walking/bicycle paths which can make hiking through the area interesting. You need to plan your walk carefully in order to stay on the main trails and not take some of the unmarked side trails. Unlike other rivers in the Toronto area, the Rouge is allowed to fill its entire flood plain on a regular basis rather than being forced through an artificial channel. Parts of its watershed include the Toronto Zoo and the Beare Road Landfill. 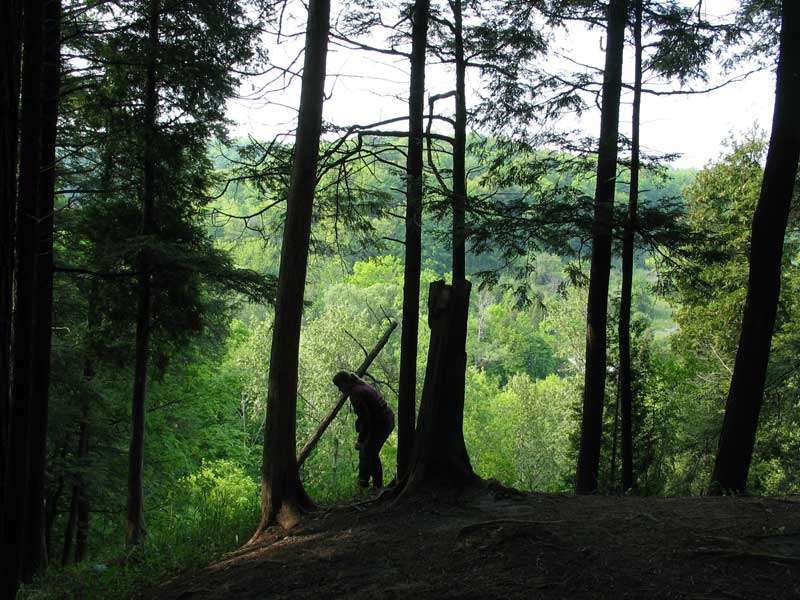 The Rouge Park is at the northern edge of the eastern deciduous forest region, commonly known as the Carolinian life zone. This zone is rare in Canada, covering less than 1% of the country's land mass, and it provides habitat to more species than any other life zone in Canada. In 1984, the Rouge River valley was identified as one of 38 critical unprotected sites; fortunately the Park was created 11 years later and now protects these important habitats.

In some places, the Rouge River has eroded 40 m below the surrounding tablelands creating the impressive bluffs that can be seen at Twyn Rivers Drive (beside the Rouge River). These bluffs reveal many different layers of glacial deposits with the Twyn Rivers Drive bluff having a sediment fault line associated with a hidden bedrock fault extending into Lake Ontario in Pickering. The geology of the region is quite interesting.

The Rouge River is a two river system. Little Rouge and Rouge River are in the east and the northeast parts of Toronto and begin in the Oak Ridges Moraine in Richmond Hill and Whitchurch-Stouffville. The Rouge River empties into Lake Ontario. 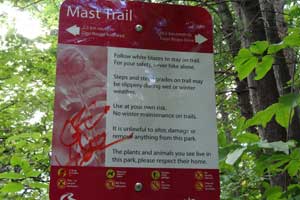 The Mast Trail follows a 200 year old logging road where large trees were cut down and floated down the river to Lake Ontario. There the logs were transported to ship building yards in Europe. This is a more challenging trail that leads over a ridge (hog's back) with some steep climbs and descents either way on the trail. Use caution on the steps and steep grades in wet weather where the trail can be slippery. The trail begins in the Glen Rouge campground and travels north to Twyn Rivers Drive to meet up with the Orchard and Vista trails. Just past (002), there is a trail leading to the Little Rouge Creek showing off a beautiful pebble beach area. Along the trail, a variety of forest plants and animals can be seen in the mature forest areas with an undergrowth of ferns and other vegetation. 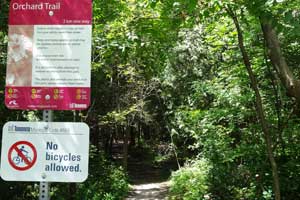 This trail shows evidence of an agricultural past being obscured by a regenerating forest that is reclaiming the land. The remains of an old stone foundation near the south end of the trail are now difficult to find. Between 003 and 004 as the trail approaches Little Rouge Creek and Twyn Rivers Drive, you can see an old ski hill with a trail leading to the top -a good fitness climb! Also at the creek, there are slabs of an old concrete dam that was once used to dam up the river for recreation and swimming when a hotel stood on the site. At the north end of the Orchard Trail (007), you can sit on a log and view the hill formed from an old garbage dump that is now being reclaimed with plantings. A large wetland pond has been formed as a result of earth being excavated to cover he garbage. Just before the long climb up to that point, there is a trail off to the right leading to an amazing bog.
A small southern portion of the Orchard Trail leads south along the creek to the Twyn Rivers Dr parking lot (P2) and a bit beyond. 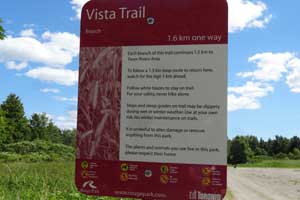 The Vista Trail leads from Pearse House in the north near the zoo down to Twyn Rivers Dr in the south. Shortly after beginning this trail from Pearse House, you'll be amazed at the beautiful panoramic view form the top of the bluffs looking down at Little Rouge Creek and the Rouge River valleys. For years an overhanging tree has defied gravity and has clung to the top of the bluffs even as it has bent over to a near horizontal angle as it hangs over the edge. A bi-level wooden viewing platform provides impressive views  looking east across the creek below and west across Toronto. A mix of meadow and forest offers a variety of plant and animal life. There are some steep grades on the trail and some sections can be slippery in wet weather. 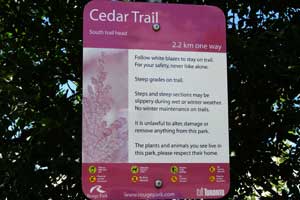 This is one of the newest trails in the park and heads northwest from 007 at the foot of the reclaimed former garbage dump up to Meadowvale Road where there is a small parking lot. At its south end, the trail circles a large wetland area created by the removal of soil to cover the garbage dump nearby. The trail descends a staircase to cross a creek before passing through a meadow and into an area of old forest growth sheltering a lush undergrowth as the trail heads northwest. A set of log berm steps makes quite a long descent down into the valley where you can get up close with the Little Rouge Creek. The Toronto Zoo has unfortunately taken away free parking on the roadsides near Pearse House and expensive zoo parking fees ($10) are in effect. This fee is said to be in effect from April to September.

I find that wandering through the scenic beauty of the Rouge River Valley makes for an invigorating hike that takes you over varied terrain to make a perfect early spring outing for adventurous spirits.  The trails pass through field, stream, and forest, and encounter a multitude of plants and flowers in the spring along with all manner of local animals.  It’s not unusual to come across a red fox, catch the fleeting image of a deer in the woods or to see the results of a beaver hard at work chomping on a tree. The natural bog near the end of the hike can be an almost mystical experience especially if you can be absolutely silent for five minutes to enjoy the sights and sounds of the bog.