Beginner/intermediate (based on hike length)

At Limehouse Conservation Area for return trip via Side Trails where possible.

2016: The Brown Benton Side Trail has been closed until further notice at the request of the land owner. This removes the loop option.

The Speyside to Limehouse hike begins at the Main Bruce Trail off 15th Sideroad and enters the Speyside Woods heading north over rocky undulating terrain to the Limehouse Conservation Area. If you only have one car then this is a 20 km hike. If you can shuffle two cars then you can do the oneway 9.5 km hike and avoid the side trails.

As you hike through the Limehouse Conservation Area, you are sure to enjoy the natural beauty of the area as well as learn of its cultural heritage.  The trail cuts through the Escarpment cliffs in an area known as the “Hole in the Wall.” There are ladders to climb down the Escarpment rock through fissures and crevices providing a glimpse into the area's geological past. The trail also passes the remains of lime kilns which was an early industry in Halton County. The lime produced from these kilns was used mainly as a binder in mortars for construction purposes. 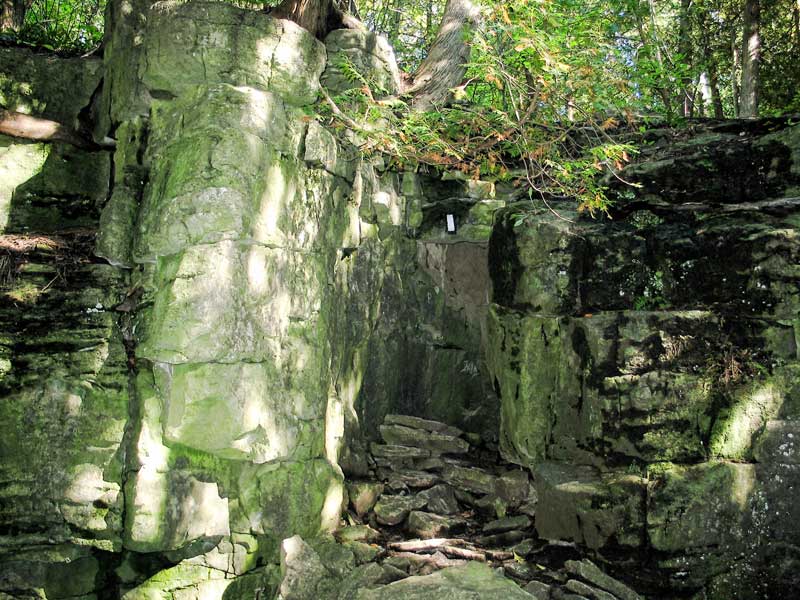 The area was attractive to lime companies because of its' ready access to markets. The natural erosion of stone on the Niagara Escarpment meant that large boulders were readily available at ground level. By 1856, Limehouse boasted a gristmill, a sawmill, and two lime operations.

The production of lime created a lot of smoke as large chunks of rock were heated in kilns fired with wood. The draw kiln process could operate on a more or less continuous basis.

Hunks of heated limestone from the kilns were slaked with water, and ground like grain. The resulting lime was mixed with sand and cow hair to be used as mortar. Lime was also used to remove oil and grease from wool and in alkali paints such as whitewash.

In 1893, a fire destroyed the woollen mill, a paint factory and 100 cords of wood at the waterlime mill in Limehouse. This was a huge economic setback but by 1917, even after a change in ownership, the lime industry in Limehouse closed its doors for good.

As you hike in the neighbourhood of waypoint (007), to the east you will see a successional meadow that was once cleared for farming. Long since abandonned, the first stage of succession (the gradual replacement of one vegetation community by another) has begun with plants such as Dogwood and Hawthorn populating the field. Hardy plants such as these along with Goldenrod help to hold the soil in place protecting it from erosion and provide cover to allow slower growing species to get established.

The Limehouse area is particularly interesting due to a series of deep rock fissures and crevices, some of which are accessible from the trail by way of ladders at the location known as the "Hole in the Wall."  Once down the ladder, it's fun to squuze through the very narrow corridor between two large rock faces and enter a small rock house. In addition I really like the remains of the 19th century lime kilns that can be found in the area, making it a site of the regional cultural heritage.