Intermediate in difficulty -fairly flat with a few steep hills but a long hike.

The trail for the Thorold South Canals hike is relatively flat with some steep hills and varied terrain. Unfortunately much of the trail between [007] and [011] is paved unlike the former trail.

Many places along the route

Revised route and maps: 30 June 2011. NOTE: This hike has been rerouted once again. The trail map and waypoint descriptions are now updated as of June 30, 2011 with a corrected satellite map and updated photo album to follow in July. The hike has been reduced in length by 3.4 km. The photo album pics begin at waypoint (006).

The Thorold South Welland Canals hike is an interesting hike through the greenways of Thorold and encompassing the  Welland Canal system with its old and new canals and the power canals and generating stations that feed the canals. The hike is long but has much to recommend it. Beware of mosquitos in season through the lower power canal areas at dawn & dusk. Also note the Bert Lowe Side Trail has recently been rerouted between waypoints (014) to (016) and no longer heads through the jumble of waterways in this area and around the southern end of Lake Gibson. This shortens the hike by about 2.5 km. Unfortunately this leaves out an interesting area of the hike.

The Welland Canal is a navigational canal 43.5 km long, crossing the Niagara peninsula from Port Weller on Lake Ontario to Port Colborne (where I grew up) on Lake Erie. It overcomes a height difference of 99.4 m between the 2 lakes and bypasses the turbulent Niagara River and Niagara Falls. 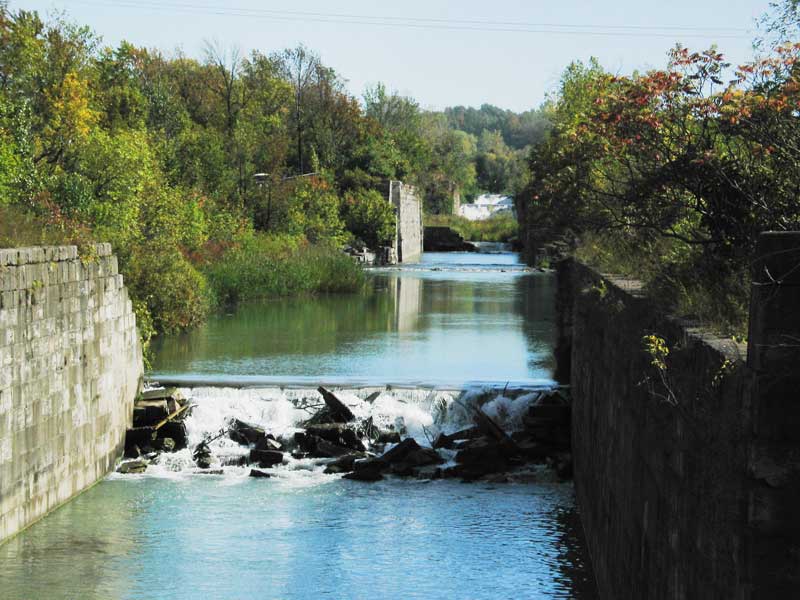 The first Welland Canal opened in 1829, primarily due to the efforts of a St Catharines businessman, William Hamilton Merritt. Later, a series of major canal projects was undertaken at various times and often on different routes. Remnants of the Second Canal (opened 1845) and the Third Canal (opened 1887), and the modern or Fourth Canal (opened 1932), with a 13.4 km bypass at WELLAND (opened 1973), can be seen along the route.

A part of the ST LAWRENCE SEAWAY since 1959, the canal has 7 lift locks between THOROLD and Lake Ontario along its northern length, and one guard lock at Port Colborne near the southern entrance. Locks 4, 5 and 6 comprise the world-famous series of twinned flight locks, with a length of 1249.7 m and a rise of 42.5 m. The canal has a depth of 8.2 m and a surface width generally of 94.5 m. The Bypass Channel at Welland is 9.1 m deep with a surface width of 106.7 m. The canal is crossed by 11 lift-bridges, 3 tunnels, one high-level bridge and a seasonal pedestrian ferry.

The Thorold South Canals hike brings back many memories and continues the history lesson on the Welland canals that was begun in the Thorold North Canals hike. At one time, the Bert Lowe Side Trail took us deep into the jumble of waterways and feeder canals that made up the Welland canals. This trail was incredibly poorly marked and it was 50-50 whether there would be blue marker at an intersection or not. To make matters worse someone was using the same colour blue paint to make strange marks in some places. Had the Bruce Trail blaze painter gone mad? We wandered into this and had no idea of where we were and how to get out. John went off to investigate one possible route and I checked out another. No luck. By now it was getting dark and the mosquitoes were very hungry. The thought of spending the night in this maze was not appealing. Suddenly we spotted a man in a suit,  all dressed up. Obviously not a hiker in those dress shoes. He told us we were very close to a road, so we followed him out and bid adieu. Then it was only an hour walk in the dark back to the car. We later wished we would have asked him for a ride back to our car. This part of the trail was closed in a rerouting of the trail which is too bad because we liked the area if only the trail was better marked.