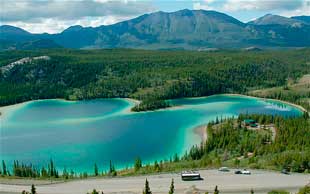 Lonely Planet names Montreal one of its top 10 cities for 2013, describing it as as a “mélange of cultures (that) marries brains and beauty. It also has The Yukon as one of its top regions for the year, calling it a place that “puts the wild in wilderness.” (Yukons' Emerald Lake pictured at left.)

Lonely Planet named Vancouver Island as a marvelous meteorological sites for the year, citing its storms. Manitoba made Lonely Planet’s “snakes alive” list due to the tens of thousands of garter snakes that live underground.

Quebec City made the “great wall walks” list for 2013, and Oak Island Nova Scotia was named as one of the best places to search for buried treasure. Montreal made Lonely Planet’s list of top cities with bike-sharing schemes and Unlucky Lake, Saskatchewan made the list as unluckiest places in the world, although editors said they don’t seem to be anything particularly unlucky about it. (Toronto Star)