What Is the Trans Canada Trail? 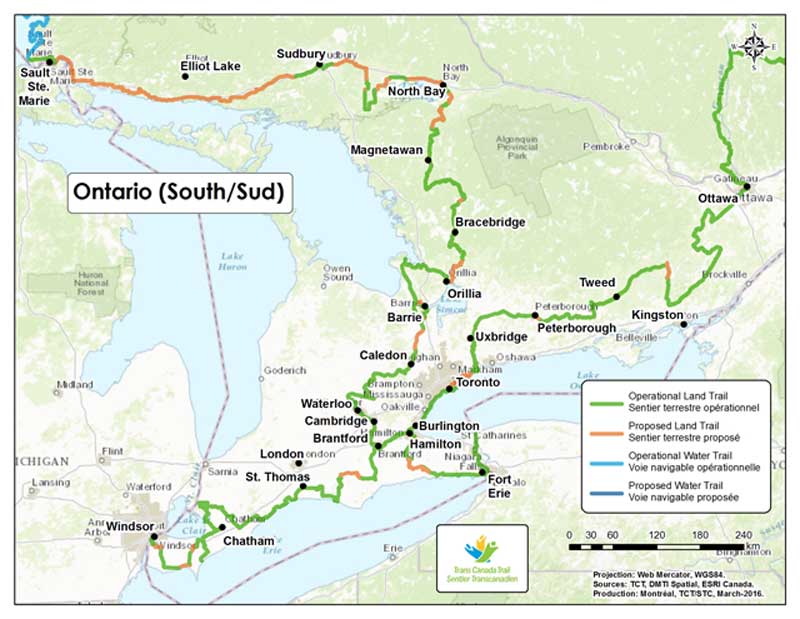 The Trans Canada Trail (TCT) is the world's longest network of recreational trails. It began construction in 1992. When fully connected, the Trail will stretch 24,000 km (15,000 mi) from the Atlantic to the Pacific to the Arctic oceans. Just over 20,000 km (12,000 mi) of the trail have been completed as of May 2016 and are usable, making the entire project approximately 86% complete.

Two hundred forty gaps totaling 6,200 km (3,900 mi) must be bridged in order to achieve a fully connected trail. The Trans Canada Trail has given itself until its 25th anniversary and Canada's 150th anniversary in 2017 to reach this objective..

The network of the Trans Canada Trail is made up of more than 400 community trails. Each trail section is developed, owned and managed locally by trail groups, conservation authorities and by municipal, provincial and federal governments.

Considerable parts of the Trail are repurposed defunct rail lines donated to provincial governments by CP and CN rail rebuilt as walking trails. As such, much of the Trans Canada Trail development emulated the successful Rails-to-Trails initiative in the United States, whereby these transportation corridors are "rail banked" as recreational trails, allowing conversion back to rail should future need arise.

The Trans Canada Trail in Ontario connects approximately 150 communities through a collection of linked multi use trails; giving preference to human-powered trail use. In Ontario many of the trails are greenway routes reserved for walking, hiking, running, and skiing; with cycling routes, paddling routes, and trail connections making up Ontario's section of the coast to coast to coast trail network.

The TCT in Ontario goes from the Manitoba border across to North Bay, down to Hamilton and from Windsor to Ottawa.