How Waterfalls are Formed | TorontoHiking 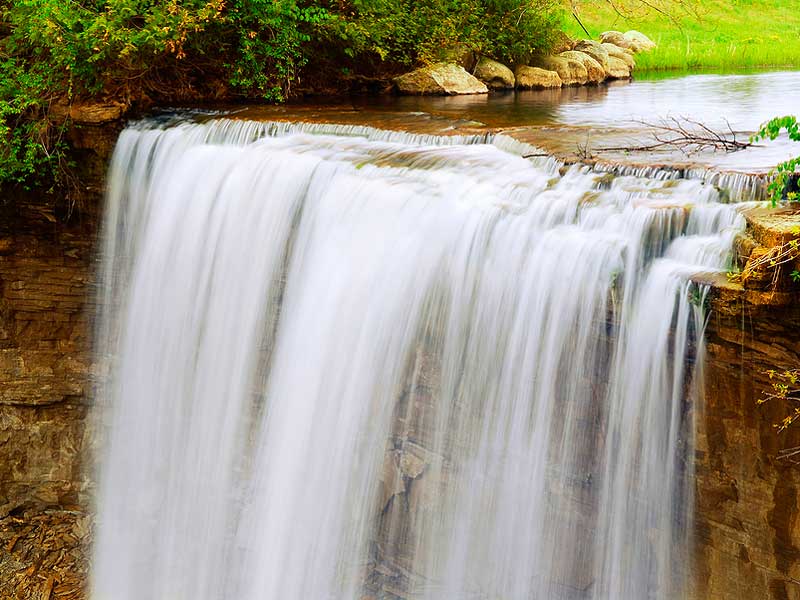 How Waterfalls are Formed

In the Niagara Escarpment, the hard rock is limestone and dolomite while the softer rock is sandstone and shale.

The basic principle here is that water is an erosive agent that erodes the various layers of rock that make up the waterfall at different rates. So as the river or stream flows over the rock, the soft rock is cut into more than the hard rock and so the watercourse becomes steeper beyond the hard rock layer. This steepening effect also increases the rate of erosion and in addition, gravity increases the speed of the watercourse due to the increasing slope. Cascades and rapids can be the early development stage in the formation of a waterfall.

You can see this development at Rockway Falls where the rapids below the upper falls have over the years evolved into Rockway Middle Falls. Eventually the watercourse became more steep until it's nearly vertical and becomes a waterfall.

As the watercourse continues to cut into the softer rock, the waterfall becomes taller, the plunge pool (where the waterfall lands) gets deeper, and the soft rock directly beneath the hard rock gets undercut. Sometimes the undercutting action is such that you can walk behind the waterfalls at the base or even into a cave at the base of the falls. Just remember that some day that rock will collapse even though it may have been like that for hundreds of years.

At Niagara Falls, for example, the undercutting continues and eventually the overhanging hard rock becomes unstable and collapses into the base of the waterfall. You can see this rock at the base of both the Horseshoe and American Falls. The net result of this action is that the waterfall retreats further upstream to the remaining lip of the hard rock layer. Due to its high volume of water, Niagara Falls continues to retreat at the amazing rate of one metre per year!

In summary, waterfalls form where the river bed has a layer of harder rock overlying the softer rocks.

1. As water falls the softer rock is eroded much more quickly than the harder rock; therefore undercutting the harder rock.
2. The hard, overhanging rock eventually collapses.
3. The collapsed rocks fall into the plunge pool causing more erosion of the soft rocks and a deeper plunge pool.
4. This goes on continuously causing the waterfall to retreat upstream.
5. The waterfall leaves a steep sided gorge as it retreats.

Big, Bold, Beautiful Over 45 waterfalls in hikes along the Escarpment with our videos and guides on waterfall types, ratings & locations.... Learn more