What are the Toronto Watersheds? 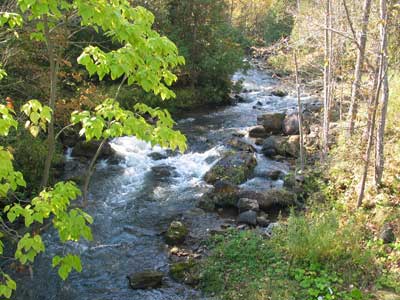 A watershed is an area of land that catches rain and snow and drains or seeps into a marsh, stream, river, lake or groundwater. In the Toronto region, all watersheds are river watersheds, with the exception of the waterfront which drains into Lake Ontario.

Covering about 900 square kilometres and home to 856,200 people, the Humber River Watershed is the largest in Toronto. Its waters, originating on the Niagara Escarpment and the Oak Ridges Moraine, flow down the Humber River into Lake Ontario. All told, the area includes 1800 kilometers of waterway and 600 bodies of water, and is home to 755 species of plants, 42 species of fish, and over 185 animal species.
Together, they total 28,860 hectares in size and support a population of over 400,000 people, and substantial numbers of businesses and industries. They are two of the most highly developed, and therefore degraded, watersheds in the Toronto area. it is the only river in the GTA that has been designated a Heritage River (1999.)

Covering an area of approximately 36,000 hectares, the Don River stretches almost 38 km in length, flowing south from its headwaters on the Oak Ridges Moraine to the Keating Channel, where it empties into Lake Ontario.
Almost half of the Don watershed is devoted to housing its 1.2 million residents presenting many environmental concerns. Today the Don River is slowly being regenerated and revitalized, and its natural heritage celebrated through annual events such as Paddle the Don and Mill Pond Splash.
The Don was named in 1793 by Lt-Gov. John Graves Simcoe after one of his favourite English rivers.

The Rouge River watershed is home to Canada’s first national park in an urban area: Rouge National Urban Park. The Rouge is 428 km long and drains an area of 336 square kilometres. 1360 archaeological and heritage sites have been identified along the river. The watershed contains the most significant system of linked natural areas along any river valleys draining into this part of Lake Ontario.

At one time the Highland Creek Watershed was 100% forested. Today it is the most urbanized watershed in the Toronto region with 85% of its landscape developed and with 360,000 residents.
Highland Creek is a river in the Scarborough district of Toronto, Ontario, emptying into Lake Ontario at the eastern end of the Scarborough Bluffs. There is no documented source for the creek's name, but some suggest it is of descriptive origins, possibly recalling the Highlands of Scotland where many early settlers of the area came from.

Located in eastern Greater Toronto, both Duffins and Carruthers Creeks drain into the north shore of Lake Ontario and are one of the healthiest of the Toronto watersheds.  A total of 192 archaeological sites have been located within the watershed representing a use of the area by both Aboriginal peoples and Euro-Canadians for thousands of years.

Located in the western part of the GTA, these watersheds travel from the south slope of the Oak Ridges Moraine down to Lake Ontario. Together, they total 28,860 hectares in size and support a population of over 400,000 people, and substantial numbers of businesses and industries. They are two of the most highly developed, and therefore degraded, watersheds in the Toronto area.