What Is the Bruce Trail?

HISTORY OF THE BRUCE TRAIL 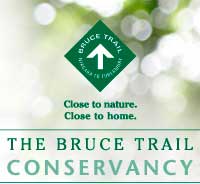 The idea of a walking trail stretching along the Niagara Escarpment from Niagara to Tobermory in the Bruce Peninsula was conceived by Ray Lowes, a Hamilton metallurgist.

The trail was planned with two basic objectives:

Ray Lowes enlisted the enthusiastic support of the Federation of Ontario Naturalists to organize a series of local clubs along the length of the proposed Trail, each club to be responsible for the construction and maintenance of a specified section.

A grant secured by the F.O.N. from the Atkinson Charitable Foundation permitted the appointment for one year of P.R. Gosling, an energetic business executive, as full-time Trail Director. To Phil Gosling fell the task of organizing the local trail clubs in the centres of population bordering the route.

Phil started work in May, 1962. Each club, as it was formed, began by surveying its area to determine the best route for its part of the Trail. Then came the job of approaching landowners to secure their permission to pass through their property. The trail clubs have found the vast majority of the landowners sympathetic to the idea of the Bruce Trail, and cooperative to a remarkable degree.

It should be mentioned here that no formal agreement is made with the owners of private lands through which the Trail passes … permission can be withdrawn at any time. It is therefore of the utmost importance that Trail users refrain from damaging the property in any way. There must be no littering and no campfires. The very existence of the Bruce Trail depends on the respect shown by its users of the rights of the owners.

In the early stages of the construction of the Trail, a handful of dedicated workers gave unsparingly of their time, energy and enthusiasm, Some purchased their own tools for the clearing work and mad other financial contributions to supplement the grant from the Atkinson Foundation and funds provided by a few generous industries. However, it is obvious that the future security of the Trail must rest on a dependable and self-perpetuating federation of local clubs under an elected directorate.

To co-ordinate the activities of the dozen-odd trail clubs, the Bruce trail Association, Inc. was formally constituted in October 1963, under the presidency of Norman Pearson, with a Board of Directors comprising representatives from each of the established local clubs.
The Bruce Trail Association, Inc. and the member trail clubs are private, volunteer organizations.

The Toronto Bruce Trail Club was established to clear and maintain the section of the Bruce Trail which stretches from Kelso Conservation Area, south of the intersection of Highways 401 and 25, to the Terra Cotta Conservation Area, a distance of some 20 miles. By the end of 1963, the Toronto Group had surveyed, cleared and marked the entire length of their section with the exception of a ¼ mile piece leading into the Terra Cotta Conservation Area. It is expected that this will be opened early in the spring after permission to pass through private property has been secured.

Anyone who enjoys using the Bruce Trail, or wishes to help ensure its continuation is urged to join the Bruce Trail Association through the nearest Bruce Trail Club. Residents of the Toronto area should send their membership dues, along with the application form at the end of this issue of *Footnotes to the address shown on the form. Membership in the Toronto Club automatically enrols you to receive all publications and notices of both organizations.

The Toronto Bruce Trail Club’s first organized winter hike is scheduled for Sunday, January 19. Walkers, skiers and snow-shoers have been invited through press and radio to take part. Monthly organized hikes are planned throughout out the year. Members will be kept posted through *Footnotes.

While many hikers like to go it alone, and are, of course, perfectly free to do so. The group hikes are always good fun, and give hikers a chance to compare equipment, etc.

Major work on the Toronto Bruce Trail Club’s section has been suspended since the fall, but will recommence around the beginning of April, depending on weather conditions. Although the heavy clearing has been done, it will be necessary to cut back new growth, re-paint some of the markers, repair stiles  and fences, check on signs. etc. Members will be advised of details in future issues of *FOOTNOTES.