What is the Niagara Escarpment? 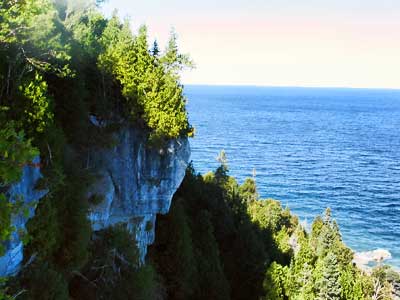 The Niagara Escarpment is recognized as one of the world's unique natural wonders. Essentially, it is a landform -- a ridge of rock several hundred metres high in some locations -- stretching 725 kilometres (450 miles) from Queenston on the Niagara River to Tobermory at the tip of the Bruce Peninsula.

It is traceable from the Niagara River to northern Michigan, forming the spine of the Bruce Peninsula and Manitoulin and other islands in northern Lake Huron. It also extends into New York State and Wisconsin, roughly encircling the Michigan structural basin in the bedrock.

The largely forested corridor which defines the Escarpment passes through the most heavily developed region of Canada. It is also an area with a rich agricultural heritage; agricultural production ranges from vineyards, tender fruit and mixed farming in the south to apples and beef cattle further north. There are a number of spectacular waterfalls at the cliff edge, the most well known being Niagara Falls. Erosion through the millennia has created a magnificent gorge such that these falls on the Niagara River are now located 12 km upstream from the main Escarpment brow.


How was it formed?

The Niagara Escarpment has origins dating back into geological history some 430 to 450 million years, a time when the area lay under a shallow warm sea. This sea lay in a depression of the earth's crust, the centre of which is now the State of Michigan. Now geologically known as the Michigan Basin, the outer rim of this massive saucer-shaped feature governs the location of the Niagara Escarpment. In the shape of a gigantic horseshoe. The Escarpment can be traced from near Rochester, New York, south of Lake Ontario to Hamilton, north to Tobermory on the Bruce Peninsula, beneath the waters of Lake Huron to appear again on Manitoulin Island, across northern Michigan and down the west side of Lake Michigan into the State of Wisconsin.

The Escarpment formed over millions of years through the differential erosion by weather and streams of rocks of different hardnesses. The Niagara Escarpment has a caprock of dolostone which is more resistant and overlies weaker, more easily eroded shale rocks. Through time the soft rocks weather and erode away by the action of streams. The gradual removal of the soft rocks undercuts the resistant caprock, leaving it standing as a cliff - the escarpment. The erosional process is most readily seen at Niagara Falls, where the river has speeded the process. The Niagara Escarpment is not formed by faulting. There is no displacement of the rock layers at the Escarpment, as shown by study or rock exposures and drillholes. Additional resistant rock layers make more than one escarpment in some places. Also, in some places thick glacial deposits conceal the Niagara Escarpment, such as north of Georgetown, but it continues underground and reappears farther north.